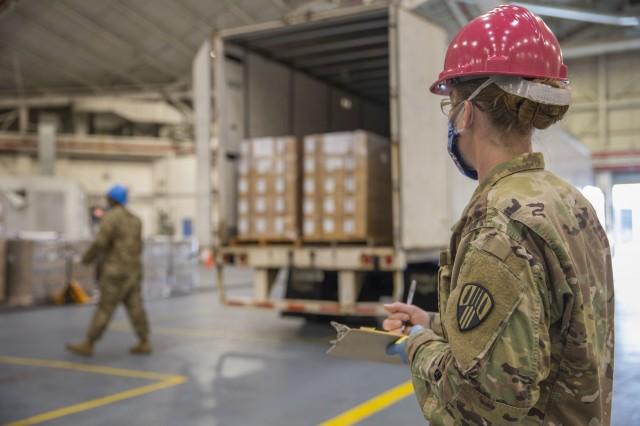 STEWART AIRPORT – At a giant aircraft at the Stewart Air National Guard Base in Newburgh, soldiers assigned to the New York Army National Guard’s 1569th Medium Transportation Company are tracking, processing and distributing medical supplies across the Hudson Valley.

“Right now, we have over 3,000 temporary beds, 200 ventilators, 10 million masks and over four million gloves,” said Army Sgt. 1st Class Javier Rodriguez, the noncommissioned officer in charge of logistics. “We’re a distribution warehouse and we’re out sending a lot of personal protection equipment to nurses, hospitals and anyone in need.”

Essential supplies are sorted at the air base, then shipped to facilities across Westchester County and New York City.

The operation is one of six warehouse operations that the New York Air Guard soldiers are operating across New York. The others are in Oriskany, Guilderland, Harriman and Colonie.

More than 33,000 gallons of hand sanitizer have been distributed in the Hudson Valley while Guard soldiers moved 100 ventilators flown into Stewart Air National Guard Base by the California Air National Guard.

The New York National Guard has over 3,500 soldiers and airmen, along with members of the New York Guard, the state defense force, and the New York Naval Militia, on missions connected with the COVID-19 pandemic.

Of those, 390 are working warehousing missions and 225 are transporting supplies.