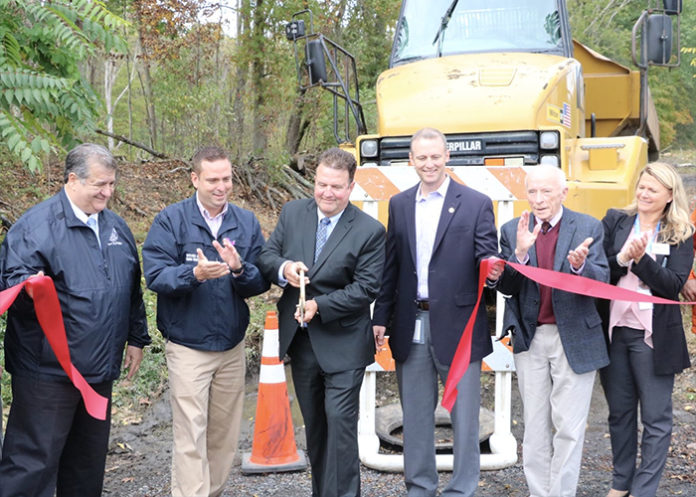 TOWN OF GOSHEN – Orange County officials marked the start of construction of another extension to the Heritage Trail. It will be extended from the Town of Goshen to the City of Middletown, making that city the first in the county to have the Heritage Trail come through it.

It will result in a fully connected Heritage Trail from River Road in Harriman to East Main Street in Middletown, totaling in 18.4 miles of paved recreational trail.

Middletown Mayor Joseph DeStefano said the investment is relatively small compared to the value his city, as well as the rest of the county will get out of it in terms of economic development, recreation and providing alternative forms of travel.

“It’s a win-win. It’s a small investment when you look at the big picture of the amount of people that use the trail and we’re excited about the opportunities,” said DeStefano. “Now, it’s up to the city to capitalize on what benefits this trail can bring to the inner city.”

The city and county have also noted the significance, in terms of commuting the trail will have for those who work in Goshen and Middletown.

County Executive Steven Neuhaus said he has already noticed the trail, in its existing state, being used for people to walk and bike to work.

He said the county is even seriously looking into having the Heritage Trail become connected to local trail branches and larger networks in the near future, such as the Empire State Trail.

“We’re already looking at expanding this into areas that have abandoned rail beds in Orange County, including Blooming Grove and Washingtonville, up into the Minisink/Wawayanda area,” said Neuhaus. “These are definitely opportunities for us to take advantage of to grow this in the future.”

Construction on the Heritage Trail extension began last Monday and should be finished in a year.