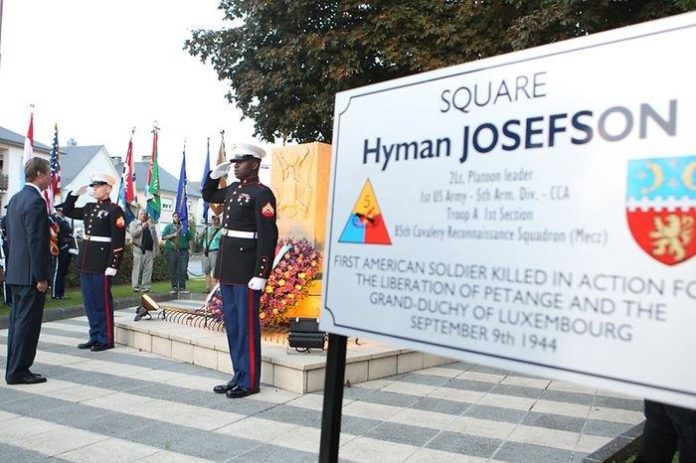 MIDDLETOWN – An Orange County native holds a prominent place in the hearts of the people of Petange Luxembourg and is honored with a memorial and a Square named after him.

Hyman Josefson was born in 1909 in South Fallsburg to Harry and Lena Josefson of Iasi Romania, and grew up in Middletown at the beginning of the 20th century.

Hyman was the youngest son of Harry and Lena Josefson, Romanian Jewish immigrants who established a thriving harness business on East Main Street in Middletown. Hyman Josefson’s story is emblematic of the greatest generation and is both exceptional and mundane. It has elements reminiscent of a Horatio Alger tale.

As a youngster, Hyman Josefson was a “newsie” for a local newspaper, an avid athlete and Eagle Scout in his youth, and he enjoyed playing baseball and attended Middletown High School where he distinguished himself academically and athletically. He achieved a perfect score on the state scholarship exam, winning tuition-free admission to Cornell University where he matriculated at the age of 15.

At Cornell, Hyman continued to distinguish himself academically and athletically. He majored in engineering, graduating in 1929 and then pursued a law degree at Cornell as well, completing it in 1931. He was elected to Phi Beta Kappa and to the Sphinx Head, a Cornell Senior Honor Society.

A star athlete, Hyman holds the bantamweight NCAA and Eastern Intercollegiate Wrestling Association championship titles for 1928 and 1929. He also competed in the 1929 Olympics trials for wrestling, attaining alternate status.

An accomplished lawyer and engineer, Hyman was already 32 when he voluntarily enlisted in the armed forces of the United States six weeks after Pearl Harbor. Hyman was one of 550,000 GI Jews, Jewish American soldiers whose service in World War II was hefted with both patriotism and the knowledge that they were also fighting against Hitler for the survival of their European brethren.

After training for two years at Fort Knox, Hyman was assigned to the 5th Armored Division’s 85th Cavalry’s Reconnaissance Unit. He was sent overseas and landed at Utah Beach on July 24, 1944. His unit marched through Normandy and France and helped liberate Paris.

His link with Luxembourg stems from his role 75 years ago in World War II when as a car commander of the 85th cavalry reconnaissance unit, Josefson was the first American soldier to breach its border and liberate the country from the Nazi menace.  Unfortunately, his armored M8 Greyhound was hit by a German missile which set the car aflame and killed him.

On September 9, 1944,  2nd Lt. Hyman Josefson became the first American soldier killed in action in Luxembourg.  His death was witnessed by a gathering crowd who had come to greet the American liberators and their returning Duke and Prince who had fled Luxembourg at the onset of the war and were serving with the 5th Armored Division.

Within days, the people of Luxembourg made a makeshift memorial near the burning vehicle and in 1947 they erected a memorial sculpted dedicated to the first American Soldier to die for the liberation of Luxembourg and inscribed with the words “We never forget” in Luxembourgish.

For 45 years, the identity of this first American Soldier was unknown. Eventually, battle site tours became popular and his identity was revealed by a fellow soldier, Cyril Mayrose, who escaped the burning car and served with him. In 1989, the site of the memorial was renamed Square Hyman Josefson.

Over the years, Hyman Josefson Square has become a place of pilgrimage for U.S. vets and battle site tourists as well as a focal point for U.S. Luxembourg relations and visits by US Ambassadors.

The site has been augmented by the addition of an M8 Armored Greyhound military vehicle similar to the car commanded by Josefson and by a museum across the street where a film in which Josefson appears can be viewed.

Ten years ago, on the 65th Anniversary of the Liberation, President Obama wrote a letter of friendship to Luxembourg, mentioning Hyman Josefson as symbolic of the sacrifice of American GI’s.

Each September, Luxembourg and the city of Petange hold their liberation ceremonies with events ranging from solemn memorials to parades, World War II re-enactments, visits by diplomats and American style barbecues, and 1950’s style Rockabilly concerts.

Every five years, Hyman Josefson’s memorial is visited by the Duke of Luxembourg, who pays his respects to the sacrifice of Josefson and other American GI’s.

This year marked the 75th anniversary of Luxembourg’s liberation and of the end of World War II. Luxembourg has not forgotten the American Veterans, and neither should we.

Note: The author, Dr. Deborah Josefson is the grandniece of Hyman Josefson. Hyman Josefson did not have any children and is survived by his grand nieces and nephews. Deborah Josefson traveled to Petange Luxembourg with her family to pay tribute to her Great Uncle this past September and was there five years ago as well as in 1989 when the Square was named Hyman Josefson Square. The family was hosted by the town of Petange, Luxembourg and was greeted by Grand Duke Henri and U.S. Ambassador Evans and participated in the commemoration ceremonies.