MONTICELLO – The once-popular
discount shopping spot, Apollo Plaza at the east end of Monticello, has
been dead and dormant for 15 years.

Emerald Corporate Park, in Rock Hill, has a medical facility but there
appears to be room for more. Most of the Emerald site remains undeveloped
woodland.

At Apollo, the focus is on developing shovel ready sites on what’s
called Phase II, a large tract behind the plaza building.

Sullivan County Planning and Environmental Management Commissioner Freda
Eisenberg told county legislators on Thursday that they need to get a
clear picture of what they have.

“To identify really what can be done with the lot because of the
topography and the constraint on where you could build, where you can’t,
what the yield would be, because right now, with under 25 acres, how much
square footage you can get on that.”

Five years ago, developer Butch Resnick was given the green light to redevelop
the property into a commercially viable, taxpaying retail operation. Resnick
did nothing.

Legislator Ira Steiingart, who chairs the legislature’s Community
and Economic Development Committee and the county Industrial Development
Agency, said on Thursday the county can never let that happen again.

“We go forward in the future, I think there needs to be restrictions
that something needs to be build soon and a time restraint on it before
we sell any land,” Steingart said. “We’re out of the
marketplace because someone else owns it and they want too much money
for it.”
For now, getting available vacant land, Apollo Plaza in particular, ‘shovel
ready’ would require some effort by the county to provide the needed
services including sewer and water. Eisenberg said engineers are looking
at what that could involve. 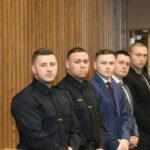