NEWBURGH – After recently learning that the United States Air Force (USAF) may not include Stewart Air National Guard Base in the towns o New Windsor and Newburgh in its next round of priority cleanup sites – because of a bureaucratic internal policy penalizing Newburgh for no longer using Lake Washington as their drinking water source – U.S. Senator Charles  Schumer has asked Air Force Secretary Barbara Barrett to include the the Stewart base in next year’s tranche of Remedial Investigations, allowing for the critical next step of PFAS cleanup to finally begin.

The senator said the Air Force selects priority cleanup sites based on the immediate health and safety risks impacting their surrounding communities and, therefore, provides preference to sites where contamination is impacting local drinking water sources.

Recently, the senator learned that because the City of Newburgh  switched off its main drinking water source after the discovery of toxic PFAS in Washington Lake in May of 2016, it may be penalized and ultimately left out in the USAF’s next round of priority cleanup site selections, as it is no longer considered a drinking water source, according to USAF’s bureaucratic, antiquated, and illogical guidelines

“The bottom line is Washington Lake was and will be Newburgh’s drinking water source, and the United States Air Force can and must clean up the toxic PFAS mess they made in the lake and its tributaries with all due speed,” said Schumer. “Newburgh’s residents have been plagued for far too long by the toxic PFAS contamination of their drinking water, and they should not be punished for the swift, logical, and health conscientious decision to protect the wellbeing of their community. The Air Force must immediately remove this –and any– roadblock that would prevent the continuation of the imperative cleanup efforts to restore Washington Lake and the safe, clean drinking water that Newburgh residents need and deserve.”

The senator said. “No one should fear that their health or that of their family is being damaged by the water they drink, which is why I am calling on the Air Force to immediately expedite the cleanup process, approve funding for a Remedial Investigation at Stewart ANGB, and allow the cleanup to move forward ASAP.”

“It boggles the mind that the people of Newburgh could be punished by USAF for taking prompt and wise action to protect people’s health in order to mitigate a problem created and rapidly denigrated by the Air Force for years. Talk about an absurd Catch-22,” Schumer continued. “That is why I am calling on the USAF to immediately prioritize this cleanup so the people of Newburgh can once again drink safely from Lake Washington and not fear the water seeping from Stewart ANGB.”

The senator stressed that passing over Stewart in this next round of Remedial Investigations would be unacceptable because the City of Newburgh did not lightly decide to abandon its drinking water source, rather, this emergency decision was provoked by the decades-long PFAS contamination at Stewart ANGB, at the hands of the USAF’s decades-long use of PFAS-producing firefighting foam, endangering the health and safety of thousands of Newburgh residents.

Last month, Schumer made a personal phone call to Air Force Secretary Barbara Barrett, urging her to select Newburgh in the next tranche of Remedial Investigations. Additionally, late last year, after Schumer secured over $2.4 million for the project, the USAF finally installed its first filtration device on Recreation Pond, marking the first concrete step in stopping the PFAS from flowing off base and restoring safe, clean drinking water for residents. However,  the senator explained that this is an interim device and without knowing why toxic water is still flowing from Stewart and where it is flowing to, the USAF can’t find a permanent fix, especially considering that there is a need for additional data surrounding drinking sources.

The senator has a long history of advocacy for the communities surrounding Stewart. In the fall of 2018, Schumer met with then-Air Force Secretary Heather Wilson to urge the Air Force to rev up the pace of PFAS contamination investigations and remediation efforts. Schumer also successfully worked to include his amendment to provide funding for the Air National Guard to make payments to reimburse New York State and local water authorities for their ongoing remediation efforts and cleanup of PFAS contamination due to Air National Guard-related activities in the FY2019 Senate Defense Appropriations bill.

In July of 2018, after Schumer’s push, a report concerning the health effects of PFAS was finally released to the public, after its release was seemingly delayed because of political considerations. In September 2017, after Schumer’s urging, DoD immediately began their Site Investigation sampling which included Recreation Pond, another Schumer request, which yielded the highest concentration of PFOS according to the NYDEC’s original testing. In June 2017, during an in-person meeting with then-Secretary of Defense James Mattis, Schumer called on the DoD to participate in the remediation of toxic PFAS contamination. In May 2017, during a one-on-one meeting with then-Air Force Secretary Heather Wilson, Schumer called on the Air Force to pledge that they would prioritize the prompt remediation of the PFAS contamination at Stewart ANGB.

Perfluorooctane sulfonate (PFOS) and perfluorooctanoic acid (PFOA) are two types of per- and polyfluoroalkyl substances (PFAS), a group of manufactured chemicals, and are persistent in the environment and resist degradation. These toxic chemicals are often used to manufacture products like fabric protectors, firefighting foam, and stain repellents. They are common primary ingredients in the firefighting foam that was used at Air National Guard bases for training and fire-suppression exercises, according to state regulators. Exposure to PFAS chemicals has been linked to certain cancers and other serious adverse health effects.

I write with great concern that the United States Air Force (USAF) may not include Stewart Air National Guard Base (Stewart) in New Windsor, New York, as part of next year’s tranche of funded Remedial Investigations (RI). Stewart has serious PFAS contamination that threatens the local water table and it deserves to be funded in fiscal year 2021 (FY21).

It is my understanding that USAF selects priority cleanup sites based on the immediate health and safety risks impacting surrounding communities and therefore provides preference to sites impacting local drinking water sources; and you would be correct to assess that Washington Lake is no longer Newburgh’s drinking water source. However, Madame Secretary, I would be remiss not to point out that Newburgh did not lightly decide to abandon its main drinking water source, rather, this emergency decision was provoked by the May 2016 discovery of decades-long contamination from Stewart, endangering the health and safety of thousands of Newburgh residents.

Over four years later, PFAS-ridden ground, surface, and stormwater continues flowing off base contaminating the community watershed at rates above the state and federal thresholds. If we still don’t know all the PFAS exposure pathways, and the recent Expanded Site Investigation (ESI) shows that to be the case, then it is impossible to write off the impact to local water sources despite the diversion of Silver Stream and the interim filtration device. The recent elevated screening levels discussed in the ESI have caused Newburgh residents great concern as they wait for USAF to find all the sources and pathways of its PFAS contamination which can only be assessed if the USAF immediately prioritizes the RI. Without knowing why toxic water is still flowing from Stewart and where it is flowing to, USAF can’t once again turn its back on Stewart’s ongoing high containment levels, especially considering that there is a need for additional data surrounding drinking sources. Nor can the USAF rely on a state filtration device, or its own interim device, to filter toxic water without knowing its source or path. Making these assumptions would only further endanger the imminent health and safety of the communities surrounding Stewart.

That’s why I urge you to take the next step of this incredibly drawn out, yet desperately needed, process and select Stewart for the Remedial Investigation with all due speed. This request is made not just as a result of my personal impatience but results from four years of patience from thousands of Newburgh residents and the thousands more before them that have been impacted by decades of contaminated drinking water and can now be penalized due to USAF’s bureaucratic internal protocol.

Thank you for your time and attention to this matter. Please do not hesitate to contact my staff should you have any questions. 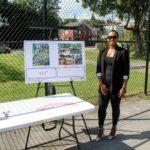 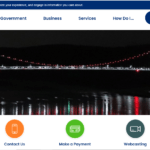 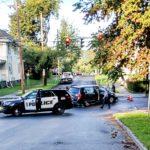 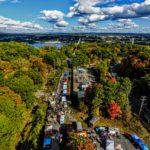 Walktoberfest returning to Walkway Over the Hudson 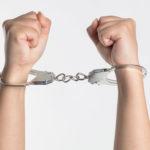