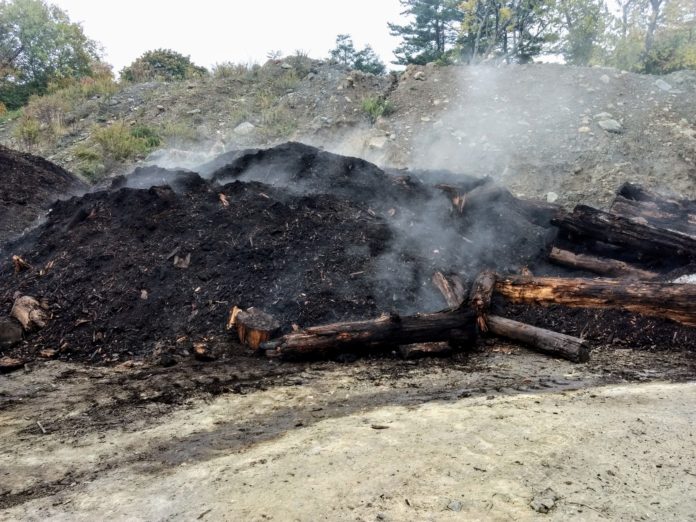 POUGHKEEPSIE – A stubborn smoldering brush fire at the city’s College Hill Park has required repeated responses from the fire department over the last five days.  Mulch created by the city’s DPW and pushed over an embankment at the park started smoldering on October 15, requiring the firefighters to respond to extinguish the smoking pile of yard waste.

The mulch was pushed down a steep embankment that leads to the park’s softball field.  Given the location and lack of heavy machinery, the firefighters were limited to dowsing the surface of the pile with water.  In previous years, the mulch had remained on the top of the hill, laid out in smaller piles, according to park visitors familiar with the area.
Between October 15 and October 19, firefighters from station 2 have responded to the scene on five different occasions.  Their time on scene ranged between 35 minutes and 90 minutes, according to Chief Mark Johnson.
On Monday morning, DPW equipment operators responded to the scene along with an excavator and operator from a local construction company, Thomas Gleason Inc.  The excavator, paid for with city funds, was tasked with shoveling the smoldering mulch from the side of the embankment back up to the level ground where two city loaders separated it into several smaller, accessible piles.
The city also brought a water tanker to the top of the hill so a worker could stretch a hose down the hill to spray water on the pile from below.

On Monday afternoon, the Gleason excavator, with the operator still inside, slid down the embankment towards the ball field and was unable to climb back up.  The heavy machine was moved around the lower level and returned to the top.

On Tuesday, an excavator and operator from NYS DOT replaced the Gleason machine and assisted a city DPW worker in moving the mulch and debris to a smaller for to be extinguished.  The agreement between the city and the state was arranged at no cost to the city.
As of Tuesday afternoon, the mulch was still visibly smoking at the site.
Video of the NYS DOT machine working on Tuesday:


The city loaders working with the Gleason excavator: