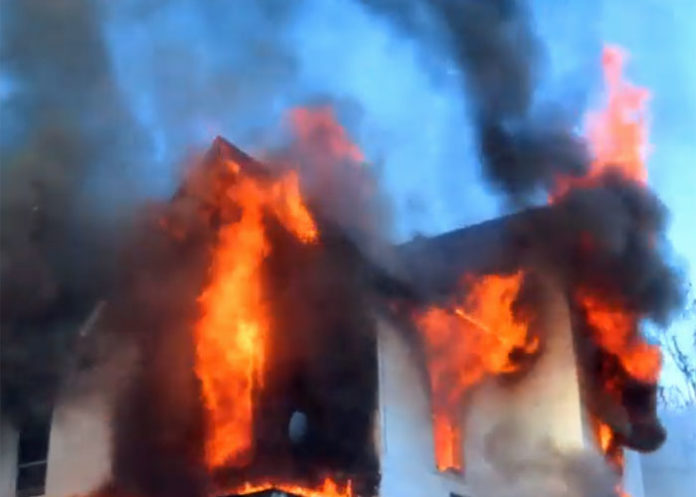 PORT JERVIS – Several residents of a multi-family house at 1 Ridge Avenue narrowly escaped from a fire that destroyed the 150-year-old house in the City of Port Jervis on Friday morning. The blaze started just after 9 a.m., and was reported by residents of the building to have started in the wall behind a vintage heater in a second story apartment.

The tenant of that apartment screamed to alert other tenants in the building after spotting the flames.

A resident in an upper story apartment, Ra-Gheen Wesbee, said she was taking a shower when she heard this tenant’s screams.

“I put a towel around myself and ran to see what was wrong.  I was told there was a fire in the heater.  When I saw the fire, we started throwing water on it but it just kept spreading. I told the tenant to get out of the building, and I ran back up to my bedroom to get dressed,” Wesbee said.  “I then ran back down, yelling for everyone to get out. I saw one person who lives there down the back fire escape. She wasn’t able to get to the inside steps.”

Wesbee said other families that lived in the building included a mother, father and children on the first floor, all of whom were not home at the time the fire began. She saw one other resident escape with his dog.

One tenant sat on a neighbor’s porch sobbing that she was not able to find her cats to take them with her when she left the building.

Firefighters on the scene encountered heavy black and intense flames as they approached the scene.

Port Jervis Deputy Chief James Rohner described seeing thick black smoke from two blocks away, and flames coming from all of the windows as he arrived.   He said firefighters quickly arrived and began an aggressive interior attack to battle the flames.

Firefighters were hampered in their efforts, Rohner said, due to an issue with the volume of water able to be supplied by the city’s water lines.  He called for an evacuation of firefighters from the structure when he and others became concerned with the lack of adequate water to safely fight the fire from inside.

This evacuation, signaled by radio and a traditional ‘mayday’ blaring of firetruck horns, caused all units to switch to fighting the fire with exterior hoses, ladder truck, and sqrt apparatus.  Water was supplemented by mutual aid units stretching hoses from Pike Street and other areas to the scene.

The once stately 1870 house, according to Rohner, was constructed in balloon-style architecture of the time. He said this traditional style of a century-plus ago likely played a big part in the fast spread of the fire unobstructed through the walls of the house.

The fire was brought until control by about noon, with units staying into the afternoon for mop-up.  A vote was taken by City Council members who met on scene on Friday afternoon and ordered the demolition of the building. The building was razed beginning on Saturday morning.

Neighbors near the home offered their homes to shelter displaced residents during the morning.  One neighbor, Joelle Almodovar of 6 Ridge Avenue, reported having heard the early screams of tenants and entering the building herself to help. She said she made her way up the steps, keeping low to the floor as she had learned to do years ago.  Almodovar said she quickly realized the extreme danger and rapidly spreading flames, and made a fast exit. She screamed to alert others in the building to leave with her.

The Red Cross was called by the fire department and offered assistance to all of the displaced residents. No injuries were reported.

Kitten tests positive for rabies in Town of Delaware