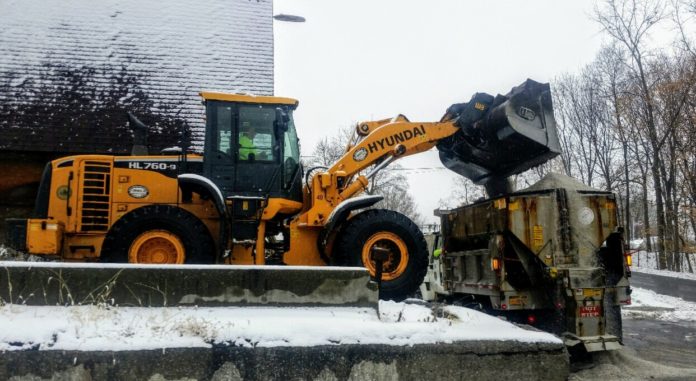 POUGHKEEPSIE – City of Poughkeepsie public works crews worked throughout the storm first clearing primary roads and then directing their attention to side roads, sidewalks, and parking lots.

With additional snow on Monday evening, DPW Commissioner Chris Gent was confident that his department was ready.  “Although it looks like a long storm, it’s been manageable so far.  There is still uncertainty about the final amounts but we’re prepared.”

Mayor Rob Rolison toured the city with Gent and caught up to plow driver Jules Meyer in truck 70 plowing lower Main Street.  Rolison took a few moments to speak with Myer. “Our DPW is a dedicated group of employees who operate as a team to keep our city running. They take pride in their work and for that, we are extremely grateful,” said the mayor.

The city’s DPW department ran two teams of workers for snow removal, according to Gent.  The teams have 20-25 men on each team and operate a variety of equipment including seven large plow trucks, pickups with plows, and snowblowers.  The teams are rotated every eight hours.

Gent said that the workers assigned to the recreation department are using the snowblowers to remove the snow from the sidewalks lining the arterials as well as the parks throughout the city.

While the large trucks are working on the primary roads, the plow-equipped pickup trucks are assisting by pushing snow from smaller streets, plowing parking lots, and ensuring that the three firehouses are cleared of snow. 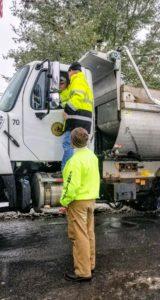 At the DPW yard, an employee operating a front-end loader is responsible for keeping the trucks loaded with a sand and salt mixture.  The city’s crews started pre-treating city roads on Sunday morning at 6.  Between the pre-treating and the application of sand and salt during the storm, Poughkeepsie has used 1,000 tons of salt.  Commissioner Gent said that an additional 400 tons have been ordered and should be delivered Tuesday.