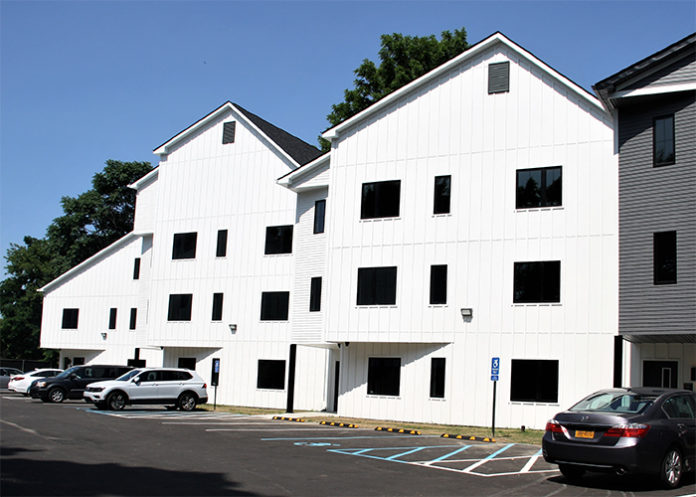 POUGHKEEPSIE – Baxter Builders has transformed a vacant, blighted 1.43-acre parcel into a site with 40 modern apartments in two separate buildings. Representatives of the company held a ribbon-cutting ceremony on Tuesday for the new buildings at 472 Maple Street in the City of Poughkeepsie.

Among those in attendance were Mayor Rob Rolison and Councilwoman Yvonne Flowers.  Both were excited to have the Baxter family transform the problem area into new housing in the city.

“The Baxters are visionaries when it comes to developing properties,” said Rolison.  Bob Baxter, the founder of RL Baxter, bought the property eight years ago for less than $200,000.

“It was very blighted and brought in a lot of negative activity,” said Flowers who praised the Baxter family for helping revitalize the 5th ward, which Flowers represents. “To have this development here is wonderful and the fact that it helped revitalize this area, which encourages more revitalization.”

Eric Baxter of Baxter Builders said that of the 40 units, 20 percent will be dedicated to affordable housing.  The younger Baxter said that the City of Poughkeepsie Industrial Development Agency and Rhinebeck Bank helped turn an overgrown field that had a homeless settlement into the aesthetically pleasing site that it is today.

Rolison noted that it was a $6 million investment in the City of Poughkeepsie and he hopes it will encourage other developers to make similar investments.

Eric Baxter also said that, of the 40 units, 23 have already been rented.  He plans to have the remaining ones occupied by September of this year. When asked where the tenants were coming from, Baxter said that approximately half were already city residents with the remainder coming from surrounding municipalities.