POUGHKEEPSIE – To honor those on the front lines of the COVID-19 pandemic, Walkway Over the Hudson State Historic Park was illuminated by more than 1,300 luminaries coming together to spell out ‘THANK YOU!’, transforming the Hudson Valley landmark into the community’s largest display of gratitude.  In total, the display of light spanned more than 200 feet.  The project salutes everyone going to exceptional lengths to keep people healthy and society functioning in the Hudson Valley and across the nation.

“We hope that through this grand display across the Walkway frontline workers know just how much we appreciate their tremendous efforts,” said Elizabeth Waldstein, Executive Director, Friends of the Walkway. “That includes our partners at New York State Parks and the Walkway park management team, all of whom have gone above-and-beyond to ensure the bridge can remain open for those needing an outdoor respite.”

In the coming days, photo prints of the temporary light installation will be presented to key agencies in the community – places like emergency rooms, grocery stores, police stations, fire departments, and the like.  Beginning on Saturday, May 2, “I Love My Park Day”, the public will be able to help extend the gratitude far and wide by purchasing prints and note cards at walkway.org to recognize those that have made a difference in their lives during the pandemic.

“The Walkway is one of the icons of the Hudson Valley, and there is no more fitting location to serve as the backdrop for this impressive gesture of thanks,” said John Storyk, Chairman, Friends of the Walkway Board of Directors. “In addition to a big thank you to frontline workers, I want to also extend thanks to everyone that lent their time and talents to create this spectacle.”

Friends of the Walkway board members, volunteers, and staff worked side-by-side with New York State Parks personnel to facilitate the creation of this display, the largest of its kind in the history of the bridge. Board member Kathy Smith developed the logistical plan and led the buildout of the light display. Board member Bob Kaminsky led production design. Scott Snell of SDS Imaging donated his aerial photography services to capture the scene. Walkway volunteer Irving Solero took on-the-ground stills. 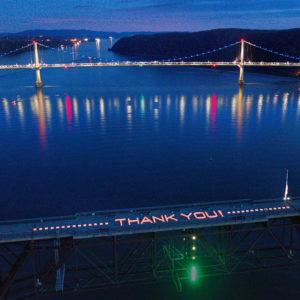 At all times, everyone involved in the project followed New York State Department of Health’s best practices for being outdoors by wearing face coverings and working in shifts to avoid gathering.  Each of the 1,300 bags was marked with ‘Honor. Remember. Celebrate.” The New York State Bridge Authority lit the nearby Mid-Hudson Bridge in blue and white on the evening of the photoshoot. Two boats from the Dutchess County Sheriff’s Office provided uplighting on the Walkway superstructure.

“When the bridge first opened in the 1890s, it was known as The Great Connector, and I think it lived up to that nickname here,” said Linda Cooper, Regional Director Taconic Region, New York State Office of Parks, Recreation, and Historic Preservation. “We’re proud of the role that Walkway Over the Hudson State Historic Park plays in our community and that the bridge is able to be open at this time for people to get fresh air and exercise while taking in remarkable views.”

Governor Andrew Cuomo has designated that New York State Parks, including Walkway Over the Hudson, remain open and accessible to the extent possible at this time. To read the health and safety guidelines patrons are asked to follow before visiting the Walkway, visit parks.ny.gov/covid19.

For more information about the creation of this special project, including behind-the-scenes photos and video, plus a detailed account of how it all came together, visit walkway.org.