The senator had a sit-down session with Barrett and Chief of Staff of the Air Force, General David Goldfein on Wednesday in an effort to convince the officials to locate the new unit at the base which straddles the towns of Newburgh and New Windsor.

Schumer said the meeting was “very productive” and how the Guard base would be the perfect location for the new squadron. “The existing infrastructure at this first-rate ANG installation, combined with the C-17 Globemaster III aircrafts and phenomenal aircrews of the 105th Airlift Wing, ensure that Stewart would be the ideal location for hosting the Aeromedical Evacuation Squadron,” he said after the meeting. 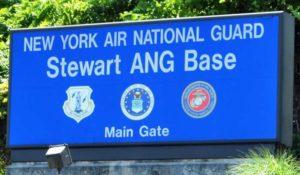 He said locating the unit at Stewart would create new jobs at the base “and ensure that our troops receive the best medical care possible when risking their lives to protect our freedom.”

In late 2019, the Air Force published a list of 17 installations, including Stewart, as potential homes for the new, state-of-the-art in-flight emergency medical car operation.

The Air Force is expected to shortlist the candidate sites to three next month and Schumer told Secretary Barrett that the Stewart base and wing’s unique combination of operational, manpower, capacity, location and cost advantages that make it the ideal location for the next AES unit.