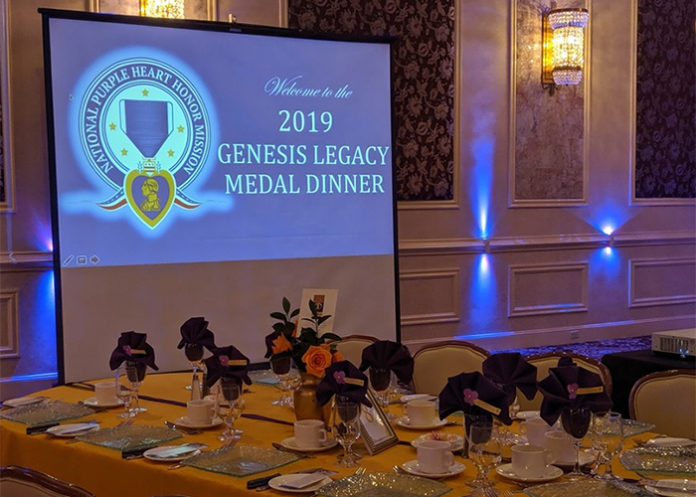 “I am truly honored to be selected to be a recipient of this year’s Genesis Medal and I will accept it in tribute to the thousands of brave men and women with whom I had the privilege to serve,”” said General (Ret.) Perkins. “Those soldiers don’t consider themselves heroes, but they deserve to be treated that way. I thank the National Purple Heart Honor Mission for all they have done and continue to do to ensure their sacrifice is remembered for generations to come.”

Perkins was Commander of the 2nd Brigade, 3rd Infantry Division during the invasion of Iraq. Originally from New Hampshire, and a 1980 graduate of the United States Military Academy, General Perkins served multiple tours in Europe and the Middle East.  He commanded units in a series of Joint and Multi-National operations including UN missions.  He was decorated numerous times for his service including the Silver Star, the nation’s third highest award for valor in combat.

Former U.S. Marine Corps Corporal Megan Leavey, a Purple Heart recipient, served our country during the Iraq War alongside her K9 partner Rex. Cpl Leavey received her Purple Heart from injuries suffered from an improvised explosive device (IED) in 2006. For her heroic actions, Cpl Leavey was also awarded the Navy and Marine Corps Achievement Medal with the “V” device for heroism in combat. Her service in Iraq and that of Rex were the subject of the 2017 film, Megan Leavey.

“It is tremendous honor to award Gen. Perkins and Cpl Leavey with the Genesis Legacy Medal, recognizing their exemplary service to our nation and their ongoing efforts to support their fellow veterans,” said National Purple Heart Honor Mission Chairman Richard Lay, a Purple Heart recipient. “The National Purple Heart Honor Mission was founded to ensure stories of our combat wounded are never forgotten. Both of these heroes are shining examples of service above self and all Americans can learn from their commitment.”