STEWART AIRPORT – Norwegian Air ends its two-year run at New York Stewart International Airport and its other US destinations today, at no fault of its own.

Its flights to Europe have been highly successful, but the airline is closing up shop here because of the sustained grounding of its Boeing 737 Max fleet. The manufacturer’s entire fleet was grounded internationally following two tragic fatal crashes involving foreign carriers.

With no immediate end in sight for those planes to return to the skies, Norwegian decided to pull the plug on its US operations that had used those planes.

This was not Stewart’s first run at international service. In the early 1990s, Atlantic Coast Airlines, headquarters at Washington-Dulles International Airport, operated flights between Stewart and Toronto, Canada. That airline, operating as United Express, was also flying daily between Newburgh and Washington-Dulles and Boston. 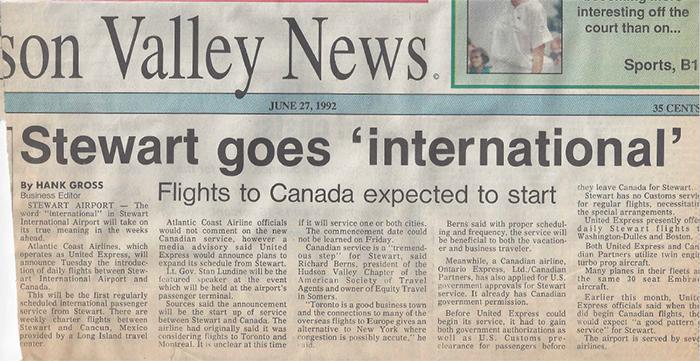 Atlantic Coast’s founder and president, Kerry Skeen, later changed the airline’s name to Independence Air and would later shut it down.

Back then, Stewart had no US Customs service or facilities, so passengers returning from Canada were pre-cleared.

Now at Stewart, a multi-million-dollar addition is being constructed at the passenger terminal to provide international travelers with Customs and Immigration services. That project is continuing even though Norwegian, the only international carrier, is leaving.

The Port Authority of New York and New Jersey, which operates Stewart, is hoping the new federal inspection station will an enticement for other airlines to provide international service.

When Norwegian announced a month ago that it would leave Newburgh, the Port Authority issued a statement that Stewart “has appeal as a global gateway to the New York Metropolitan region” and is also “a key gateway to the Hudson Valley.”