GOSHEN – Two weeks after the general election, Annie Rabbitt, the Orange County clerk, announced she is not seeking reelection in November 2021 after her second four-year term expires.

“It’s time. I have been serving the public for 20 years,” she said.

Rabbitt, a Republican, made her announcement outside of the Orange County Government Center in Goshen, thanking her GOP counterparts for her success in public service.

Rabbitt said her tenure has been marked by an office move into the government center and the COVID-19 pandemic, which forced her staff to work more online and help those who may not be “computer savvy.”

“We’ve had a lot of challenges to move us into this building within a certain amount of time and to sure make services were not cut for the public,” she said. “We keep a very open mind for everybody. We take it seriously, and we work very hard for the people.” 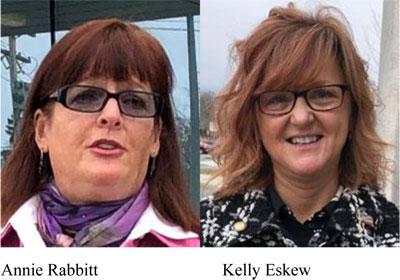 After Rabbitt thanked everyone, including her staff, she let Kelly Eskew, her deputy, take the podium to announce she will seek the seat of county clerk next year.

“I have been the deputy for the past seven years,” said Eskew. “We’ve introduced a lot of new services, and I’d like to keep going forward with that initiative.”

Eskew is also a Republican and currently serves on the Crawford Town Board after previously serving as town clerk.

“It’s seen a lifelong goal of mine,” she said. “When I was town clerk, I eventually wanted to be county clerk. It’s just a life of service.”

Prior to her serving on the county level, Rabbitt was a State assemblywoman.

State Assemblyman Colin Schmitt called her “a boss, mentor and friend to me.”