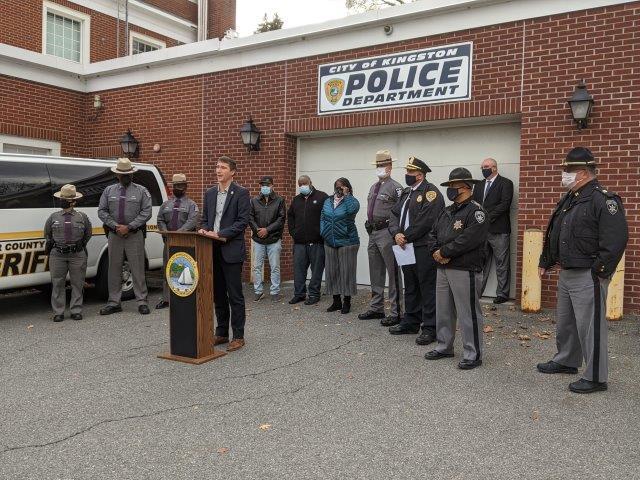 KINGSTON – Mayor Steven Noble and the Kingston Police Department have released the results of a law enforcement partnership in the City of Kingston.

Back in August, Kingston Police, in partnership with the State Police, Ulster County Sheriff’s Office and District Attorney’s Office, collaborated on a law enforcement operation to address the recent increase in gun violence and associated drug activity.

Uniformed police officers, troopers, and deputies patrolled together throughout the 12 weeks of operation. Plainclothes and undercover investigative personnel from each agency also participated during this unique cooperative effort.

The program was intended to eliminate gun violence: detect and remove the guns and the individuals possessing weapons that are being used in the community;  break the cycle of drugs and violence: identify the locations and individuals providing the supply of, and creating the demands for illegal narcotics and substances; and build a respectful dialogue with the community: meet with community leaders and neighborhood representatives at scheduled gatherings, and initiate friendly interaction with neighborhood families and residents, explaining the goals and intentions of this effort.

At the conclusion of the 12-week program, the combined personnel engaged the public in over 1,400 ‘encounters’ (traffic stops and field interviews), all of which were based on some specific violation of the state vehicle or criminal law. Those encounters resulted in 217 arrests: (55 were individuals charged with a felony, 149 were individuals charged with drug or gun-related offenses), and 1,144 of the encounters resulted in a simple verbal warning to the citizen about the infraction for which they were stopped.

During the combined police effort, five loaded handguns were taken off the streets and a number of drugs were seized including heroin, cocaine, marijuana, ecstasy, suboxone, crystal meth, fentanyl, and oxycodone. Also, over $7,400 in cash was seized.