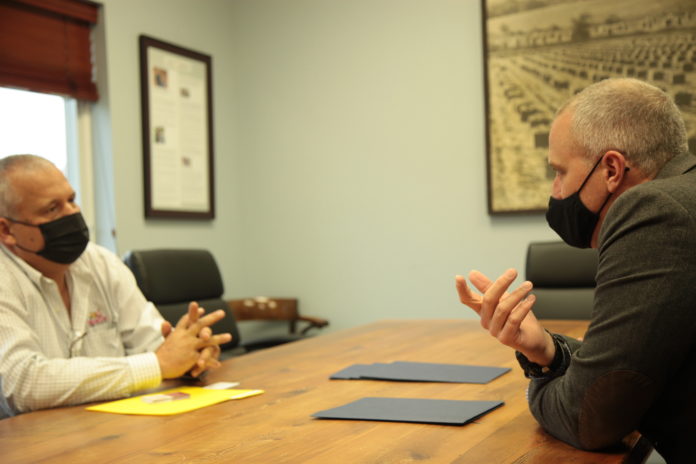 During a tour of Minkus’ facility on Wednesday, viewing the various changes and equipment investments they’ve made in their operations since COVID, Maloney and Minkus’ management discussed the Coronavirus Food Assistance Program (CFAP).

Minkus had just invested $100,000 in a second production line to get their workers safely distanced. With the added, and according to Minkus, one of their largest, expenses of cleaning costs and losing business to Canada because of their anti-competitive subsidies, they have applied for CFAP currently through their FSA. Maloney said this assistance not only helps Minkus, but can also help other farms in the Hudson Valley.

Farm General Manager Rod Runnalls said if he could prioritize the biggest need for local onion producers, like themselves, it would be securing funding for the creation of an extension associate at Cornell University who would reach out to vegetable growers about the invasive species: Allium leafminer. It has been infecting onions and other Allium crops like garlic and chives, but its origins and preventative measures are not widely enough communicated according to Runnalls.

He said he hopes the immediate action would be to secure funding for a study in Canada to see if the leafminers are coming from there after originating in Europe, which is a known point of origin for the species.

Maloney said they have put in approximately $1 million in funding for studying the allium leafminers. Professor Brian Nault from Cornell’s AgriTech Department of Etymology said in an overview of the Extension Associate that it would cost an additional $400,000 overall: $213,000 for three year’s salary, $146,970 for fringe benefits and $40k for travel and lodging.