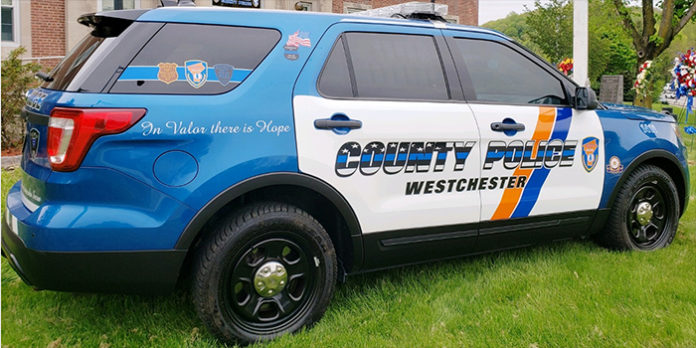 HAWTHORNE – Three Bronx men were arrested and a loaded handgun was seized when Westchester County Police interrupted an illegal speed contest on the Saw Mill River Parkway in Yonkers.

At 2:25 a.m. Monday, a patrol sergeant observed two vehicles racing northbound on the Saw Mill near McLean Avenue. The sergeant attempted to stop one of the vehicles, a blue BMW, near Yonkers Avenue.

The BMW fled on to westbound Yonkers Avenue, where it was involved in a minor collision with another responding County Police patrol vehicle. The driver and two passengers in the BMW were taken into custody, a loaded .22-caliber handgun and a quantity of marijuana were seized, and the BMW was impounded.

The arrests are the latest in an ongoing enforcement crackdown by County Police targeting drag racing, vehicles with inadequate mufflers, and other violations that cause excessive noise. Multiple arrests, summonses and impounds have resulted in recent months from the ongoing enforcement initiative.

The BMW driver, Tyshawn Palmer, 27, of East 137th Street was charged with criminal possession of a weapon as a felony; reckless driving, aggravated unlicensed operation of a motor vehicle, illegal speed contest and criminal possession of marijuana as misdemeanors; and multiple violations of Vehicle and Traffic Law.

Public Safety Commissioner Thomas Gleason said that the County Police will continue this targeted enforcement on the parkways it patrols to combat the dangers of drag racing and the nuisance of its associated noise. In addition, Patrol officers continue to work on joint enforcement efforts targeting drag racing with the Yonkers, Greenburgh and New York State Police departments.

Gallay to step down as riverkeeper