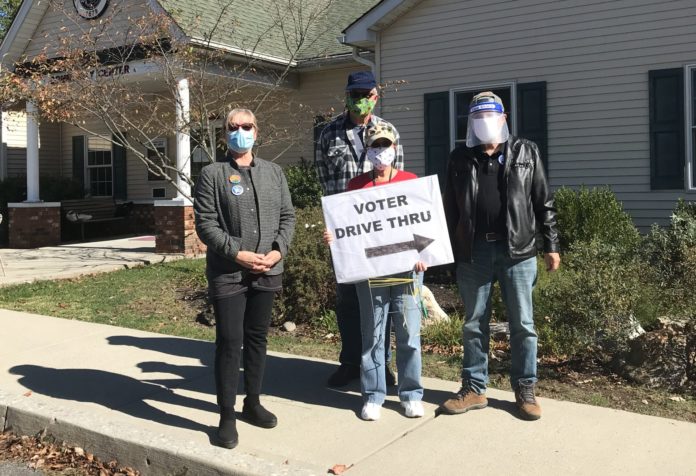 NEW PALTZ — Ulster Activists, or U-Act, conducted its last of six voter drive-through events outside of the New Paltz Community Center to engage residents in voting during what could shape up to be one of the most consequential elections in U.S. history.

Each of the drive-through events was designed to encourage new voter registrations, hand out absentee ballot applications and engage the public on how they can vote during a pandemic.

Organizer Elizabeth Lee explained how the event series came about.

“Ulster Activists wanted to do a nonpartisan type of activity to inform voters about early voting about absentee ballot about our local law number one [referring to the environmental preservation ballot proposition that is on the ballot for New Paltz voters],” she said. “It’s nonpartisan, so it doesn’t matter which party you’re from.”

The drive-thru came as over 27 million U.S. residents have already cast their ballots through early voting and sending absentee mail-in ballots. Controversy remains over the latter procedure, with slowdowns in receiving and sending mailed ballots due to President Trump’s efforts in obstructing the U.S. Postal Service to hinder mail-in voting.

Lee offered solutions for those concerned about voting during a pandemic.

“Commissioner [Ashley] Dittus of the Ulster County Board of Elections has made an option for you to turn in your absentee ballot at the early voting polls,” she said. “All you have to do is just turn it in, or someone can turn it in for you, and then bypass the mail.”

Lee said since absentee ballots will not be counted until a week after election day, it may not be until Thanksgiving that results will be known.

Volunteer Vanessa Hoheb works to motivate her fellow residents to vote during these trying times.

“My approach has been on a very personal level, trying to do things in my town, very much one on one,” she said. “Whenever I’m in a group of people, I ask them, point-blank, ‘are you voting? Do you have a voting plan? How can I help you?’”

Assistance was provided to a total of 45 New Paltz residents throughout all six of the drive-through events. Fifteen collected absentee ballot applications, 12 picked up voter registration forms, and 28 were provided information about the voting process.