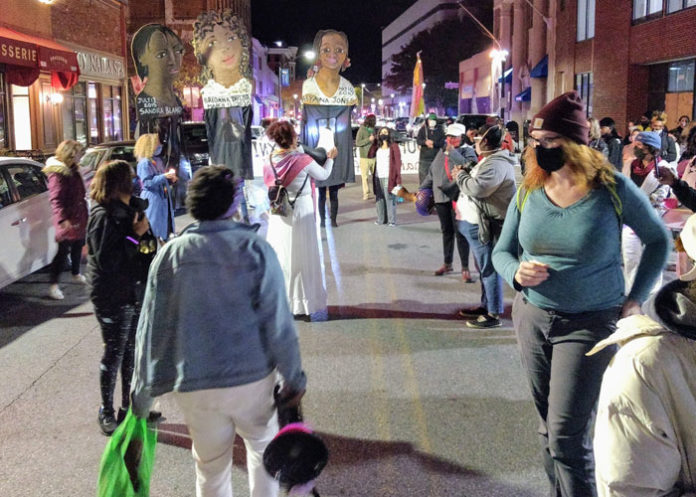 POUGHKEEPSIE – A rally for women was held in Poughkeepsie Saturday night, causing police to stop traffic on several main thoroughfares to prevent marchers from being struck by vehicles.

Shortly after 7 p.m., nearly 150 people gathered in the vicinity of Main Street and Columbus Drive, near city hall, blocking traffic, to demand justice.  The group, consisting mostly of women, were protesting the way they say they are treated by law enforcement.  The protest was similar to ones held across the nation Saturday that were calling for better treatment of women.

The Poughkeepsie rally included marchers from New York City and the surrounding area, including four men waving Antifa flags, was unannounced and caused police to rush to the area to prevent accidents, according to police sources.

The marchers proceeded to travel eastbound on Mill Street, a three-lane westbound thoroughfare and stopped near the Mill House Brewery at which time police were forced to stop vehicle traffic to prevent the marchers from being struck by motorists not expecting marchers in traffic at night.

After a brief pause, the marchers traveled south on Garden Street to Main Street where they shut down the road again to rally support for black women and transgender individuals.

The rally then traveled to Canon Street where they stopped in front of the Dutchess County Board of Elections office to again call for justice and better treatment of women.

Being forced to close several streets in the city for safety precautions, Police Captain Rich Wilson summoned assistance from the Town of Poughkeepsie Police, State Police, and the Dutchess County Sheriff’s Office to control traffic.

The group, operating without a required permit, also forced the closure of Market Street and the eastbound arterial as they made their way to Hulme Park at the intersection of Market and Church Streets, where they gathered for a few more calls for justice before dispersing around 8 p.m.

Molinaro seeking to hire for help with diversity in the workforce