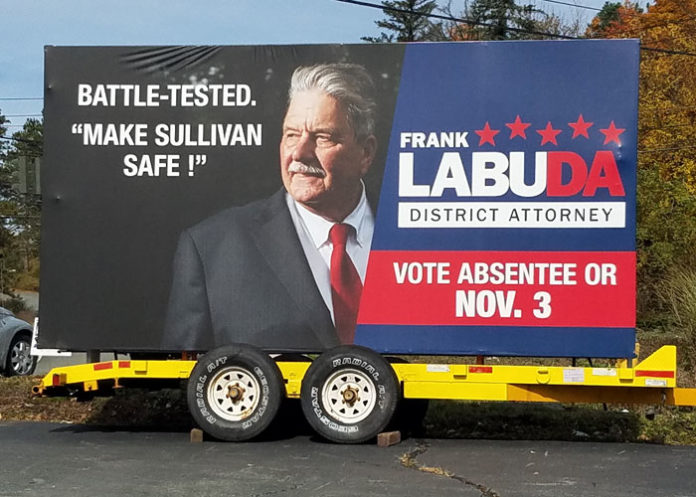 MONTICELLO – The war of words in the race for Sullivan County district attorney has heated up as former DA Stephen Lungen has accused Republican former County Court Judge Frank LaBuda of distorting his record from his military service to his time as an assistant DA and on the bench.

In a campaign ad in his race against Acting DA Meagan Galligan, LaBuda says he is “battle-tested,” but Lungen called that claim “delusional and pure fiction,” saying while the former judge did serve in the Middle East, he was in the Judge Advocate General Corps (JAG Corps) and never was involved in combat arms.

“If you ask the common person on the street, who doesn’t know much about the military and just reads his ads, they would think that this is a guy who actually served, for example, in the infantry, who carried a gun and fought the enemy in the Gulf, and that’s just not true,” Lungen said.

The former DA, who has endorsed Galligan, also claimed that LaBuda had a large number of his decisions while on the bench reversed by the Appellate Division and that he is running for DA so he can collect his state pension and the DA salary.

LaBuda struck back at Lungen’s attack.

“It’s sad that he would use his former office and his former respect for some cheap political gain,” the former judge said.

Lungen said he has supervised both candidates while he was DA and that Galligan is the most qualified person to hold the top post.

“It is an absolute conflict of interest for Steve Lungen to absolutely distort my record. He has pending cases in front of Acting DA Galligan and he is clearly seeking special favor,” LaBuda said Monday.

“Regarding my military record, I volunteered and served my country with distinction. During my duty in Kuwait, I received a debilitating injury in oil wells that were on fire and I regularly was in hot zones during scud missile attacks. It’s shocking this service would be diminished. Galligan’s silence when her surrogates make libelous political attacks is part of a shameful campaign for an elected office that must have integrity,” the former judge said.