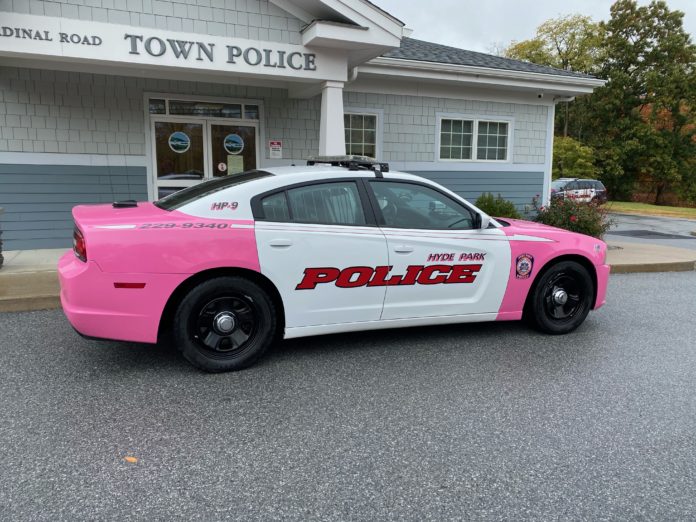 HYDE PARK – The Hyde Park Police Department has unveiled a new paint scheme on one of their patrol vehicles to raise awareness for breast cancer.  In addition to the newly marked vehicle, the officers are raising money for the National Breast Cancer Foundation.

Flanked by members of the department, Chief Robert Benson joined Town Supervisor Aileen Rohr and State Senator Sue Serino to unveil the awareness vehicle.  Serino was recently diagnosed with breast cancer and underwent aggressive radiation treatment five days a week for a month this past summer.

Chief Benson said his department created the car “dedicated to the continuing fight for Breast Cancer Awareness in honor of those fighting this horrible disease.” He said Officer Rafael Torres spearheaded an effort to design pink patches to help support Breast Cancer Awareness. Officers purchased the patches and flags to wear on their uniforms, the chief said.

Hyde Park resident Kevin Ward, owner of Premier Autobody in Highland, painted the car with the unique color scheme for the department. As the vehicle was unveiled, the Hyde Park Police Department presented Rohr and Serino with a pink patch that many town officers are wearing for the month of October.

Serino was warmed by the sentiment of the department “After my diagnosis, I saw firsthand what a truly supportive community we’re apart of and this event is another important reminder that no one here in Hyde Park ever fights alone. Awareness is the key to prevention and this striking pink Hyde Park police car is one more way we can spark conversation and raise critical awareness. I’m so grateful to the Hyde Park team for going above and beyond on this critical issue.”

While the department is raising money for the National Breast Cancer Foundation (NBCF), they are encouraging members of the community to consider donating.  Donations can be dropped off to the Hyde Park Police PBA at the station or sent directly to the NBCF in the name of the Hyde Park Police Department.