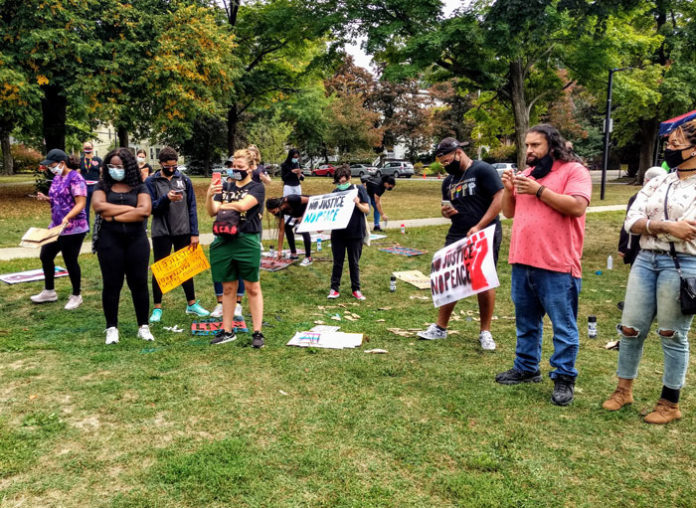 POUGHKEEPSIE – Robert Pemberton and Joe Stratford organized one of the biggest protests in the Hudson Valley in June to denounce racism and rally against what they say is bias in police departments across the country.  The June “I Can’t Breathe” rally drew an estimated crowd of 2,000 people.  On Saturday, the men held a smaller rally in Poughkeepsie saying that nothing has changed since June.

Gathered at Earline Patrice Park, a crowd of approximately 100 people heard Stratford, Pemberton, and County Legislator Giancarlo Llaverias rally against recent deaths of people across the country at the hands of police.

Pemberton also took time to address the violence in Poughkeepsie, including the recent murder of 15-year-old Jaleni Jones who was shot at the intersection of Mani and North Clinton Streets last Monday.  “We need to stop the violence. More work needs to be done to stop kids from killing each other,” said Pemberton.

Stratford said that Saturday’s event, “I Still Can’t Breathe,” was held because “We still can’t breathe and we are going to continue to rally and keep making our voices heard.”

The crowd left the park and marched to the site were Jones was murdered, to pay respects to the child before heading to city hall, the Dutchess County Law Enforcement Center, the Walkway Over the Hudson, and returned to the park.  ”

The common council is slow to respond to our concerns,” said Pemberton.  “It took months to pass the Right To Know legislation under Sarah Salem’s leadership and she is dragging her feet on the creation of the Civilian Review Board,” said Pemberton, who noted that Salem wasn’t at the rally.  “Sarah Salem took issue with the last rally because she wasn’t invited to march to the Mid-Hudson Bridge with us.  What she fails to understand is that these rallies are not being held for photo ops, they’re being held to create change.”