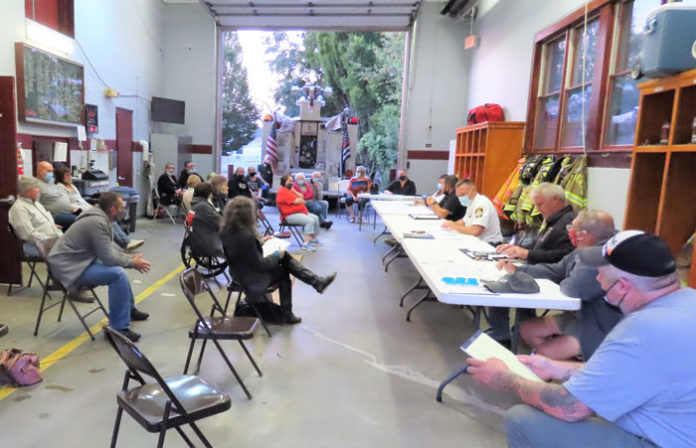 PORT JERVIS – A grassroots citizen group has pledged to get more involved in taking back troubled Port Jervis neighborhoods and peaceful ways of life.  They met during a week that saw two shootings in one evening, with two teenage victims hospitalized.

The citizen group, Take Back the 4th Ward, was launched in April by residents Tina Pantis, Bill Conklin, and Gina Torres. Initially the group met online, but with recent relaxing pandemic guidelines, were able to meet in person with the approximately 30 who attended Thursday evening’s gathering at Howard Wheat Engine Co. No.4.

Guest speakers Port Jervis Police Chief William Worden and Mayor Kelly Decker, and others, spoke about problems and actions being taken to address them.

Decker displayed a state handbook released by the governor’s office on collaborative policing, noting that many of the policies and suggestions are already in operation in Port Jervis.

“But there are always things we can do to improve,” Decker said.  “I will be announcing a group that I am forming to meet, gather public input, and draft an Operation Plan Outline.  We should also walk together in our neighborhoods, be visible, and call landlords of houses where there are consistent problems.  We have to have responsibility for our neighborhoods and the way we want them to be.”

Worden agreed, stressing the need for citizens to get involved in helping and sharing information with police.

In response to a question about which areas prompt the most police calls, Worden said it is an area that geographically encompasses portions of the lower sections of the second and fourth wards.

“In crime-mapping these areas in the city, it’s the basin area of the second and fourth wards – we call it the 2-4 zone – where we are seeing a disproportionate number of problems and crime.  We’re seeing a lot of crack cocaine and heroin sales, and in the last couple of months more of the most violent crimes in this area,” Worden said.  “We need people to help by writing down license plate numbers, make and model of cars, descriptions of people, and not to be afraid to talk to our officers. These officers are working diligently to keep our neighborhoods safe, but they are also busy responding to calls throughout the city and can’t see everything.”

Worden spoke of this week’s shooting of two 16-year old boys, noting how lucky each is to be alive.

He said, however, that even though it may appear that crime has been higher than in past years, he and his department had actually been working toward a repeat of a record low.

“We are not going to allow this violence to take over our wards.  I am very interested in hearing from the public; what’s good and what’s bad.  I received excellent feedback this evening, and when there is open dialogue like this, I believe it shows trust. This is needed in forming partnerships and energizing the public to take ownership of their neighborhoods,” Worden said.  “That’s how we are going to cut crime, by reinvigorating neighborhood groups, by getting people to know that they can trust and talk to our officers.”

District Attorney David Hoovler pledged the support of his office in helping to implement programs in problem areas, and to strongly warn and counsel repeat offenders.

“There are programs that can be put in place, and many of the practices are already taking place informally right here in Port Jervis,” Hoovler said.  “I have complete confidence in Chief Worden and in Port’s police force. They know the city and they know the people.  I’m here to help, if needed.”

“I don’t want this in my neighborhood,” said one man who spoke from the audience, offering his porch for police to sit and observe neighborhood crime from. “They are dropping drugs in my yard, carrying bats, and six random shots were fired into a house on my street.  Six years ago, it was great here.  Now it’s not.  My neighbors are slobs, and it’s not safe for my family or my neighbors.”

A female resident of the ward asked, “Why are they committing crime, and then just walking free?”

“I can tell you why,” she continued.  “It’s because of bail reform.  A lot of elderly people and single people make up my neighborhood. They’re afraid, and they’re afraid to get involved because of retribution.”

Simmons praised the efforts of the police in quickly apprehending the shooter in this week’s incident, and for their diligence in stepping up patrols in the ward.

Siegel asked for the return of K-9 patrols in the ward, stressing that children should not be afraid nor find themselves in danger in their yards and neighborhoods, nor surrounded by drugs.

Conklin, who was once the captain of a Fourth Ward Neighborhood Watch group, announced the return of the group to bring visibility and help for police. The councilmen said they will hold ward meetings in conjunction with this.