NEW WINDSOR – One person was killed when fire raged through a structure at 111 Cedar Avenue in the Ducktown section of New Windsor late this morning, according to first responders at the scene.

The call for the fire came in around 11:00 am.  It required firefighters and equipment from The City of Newburgh, Valis Gate, and Cornwall Fire Departments to assist at the scene.

Fire officials have indicated that the fire began on the front porch of the house and rapidly extended to the second floor of the structure. 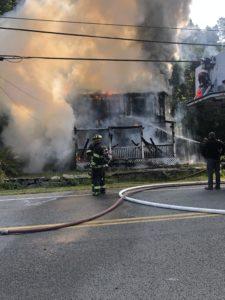 New Windsor Police and EMS were at the scene, while Orange County Sheriff’s deputies and New York State Police handled traffic at Walnut and Cedar. Central Hudson was Called for power to be cut. The fire is under investigation by the New Windsor Police Department.