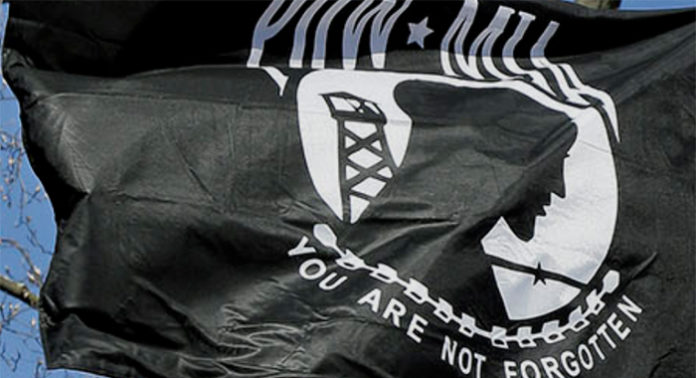 HUDSON VALLEY – The third Friday in September is National POW/MIA Recognition Day. It honors those who were prisoners of war (POWs) and those who are still missing in action (MIA). The day of remembrance is most closely associated with the Vietnam War although there are former POWs from WW II that help keep memories alive.

Henry “Hank” Hochlowski was the honored speaker at the Friday night memorial in Wappingers Falls.

Mr. Hochlowski was born in Poughkeepsie in 1925.  While attending Poughkeepsie High School, he was drafted into the Army in 1943.  After completing basic and advanced infantry training, he was shipped off to Europe.  While fighting the Germans in France, he was forced to surrender to Hitler’s troops and became a POW.

On Friday night, the Army infantryman told of his war experiences as a soldier tasked with carrying a Browning Automatic Rifle (BAR) at the Joseph MacDonald Memorial.

Hochlowski recalled the intense situation, sharing the circumstances under which he was captured and the following events, how he and the other POWs lived under German incarceration. He said although it is hard for him to recount the actual firefight, as well as other immediate events prior to his capture, they come back to him in waves and he feels it’s a responsibility to share the stories of what POW life was like, especially for those who are MIA.

“It brings back the memories- reliving it, but that’s things we have to deal with, to not forget war is hell, and let’s not have it anymore. It just ruins a lot of people,” said Hochlowski. “Here, it’s been 75 years and I can’t forget it. I can’t get it out of my mind and I think I’m done with it and then I start and all the other things start falling in,” he said.

Hochlowski told those in attendance of being gun-butted by a German officer, taken into custody, and shown the bodies of his fellow soldiers, strewn in a pile, just for the kicks of the officer who detained him. He spoke of eight men being fed a slice of bread made of 40 percent sawdust to split between them, the job of dividing the bread amongst themselves being rotated daily because it was such a burden of responsibility. Only on Christmas, he said, were they allowed having flags wrapped in wax paper, that it was a very special event and that the American soldiers were grateful for it.

Albeit, he maintains it’s a duty of his to share the story.

As of now, Dutchess County Executive Marc Molinaro has designated September 18th as Hank Hochlowski day for the county in honor of his service and sacrifice.

Adam Roche, the county’s Director of Veterans Services praised “Hank”.  Roche is a Marine Corps veteran that participated in some of the most ferocious battles in the Middle East.  Those that served with him consider him a “True Marine”.  Like most combat veterans, Roche rarely speaks of his experiences because he realizes most civilians wouldn’t understand the sacrifices.  “I’ve been in some fierce battles.  With bullets whizzing past me, I was concerned.  Walking away from those battles, I carried some pride – and then I met Hank.  He is one of the last true heroes of World War II.  I can’t imagine going through the Hell that he encountered.  Hero.  That’s what he is.”

Roche gave a rare insight into his persona, by saying “So many people out there would do anything to meet their hero. It was Michael Jordan to me and Derek Jeter, LeBron James, and many other unbelievably talented athletes. I got to sit down and talk with one of mine that I had no clue who he was. Henry “Hank” Hochlowski. He is a WW II veteran who was POW in Germany. Today is POW/MIA day and there was a handful of us that were blessed to hear Hanks’s story tonight.  I would like everyone I know to listen to his story. I promise you this will be the best thing you have watched.”

NYS Senator Sue Serino attended the event and spent time with Mr. Hochlowski. “Today we pause to honor the brave men and women who were prisoners of war and those who never returned home after serving our nation. We know these individuals left a tremendous void in the lives of countless loved ones and today we honor their legacies, their sacrifice and their courage. While they may not be with us, they are never ever forgotten.”  Serino added “Americans owe an enormous debt of gratitude to men like Mr. Hochlowski.  The sacrifices he made on our behalf can never be compensated for.  We have a debt to brave troops like Hank that we will never be able to repay.  Our Soldiers, Sailors, and Marines need to be recognized every day.”

An extended interview with Mr. Hochlowski was recorded on a video that can be viewed below.

Sullivan County also memorialized the day of remembrance.  Highlights of the memorial can be viewed below.

New PILOT framework for Kingstonian would more than double payments

Car crashes through window of Town of Wallkill store