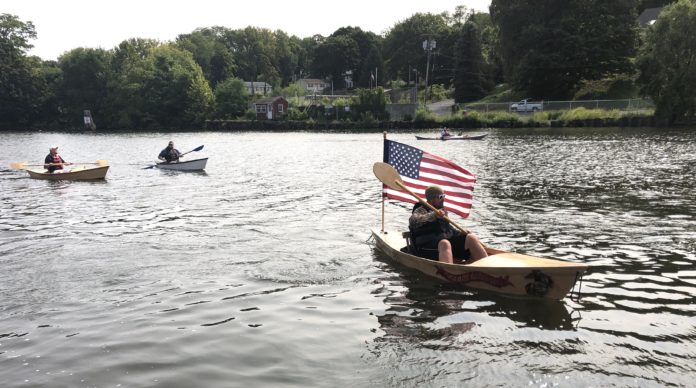 KINGSTON – Matt Russell of Saugerties did three tours in Iraq in the United States Marine Corps from 2004-2009.  Now he’s going the extra miles, by land and water, to highlight the madness his fellow vets face at home.

Russell and his fellow vets departed on a walk to Albany two weeks ago for the Hudson Valley Center for Veteran Reintegration from Tech City to bring attention to the homelessness, suicides, and mental illness facing veterans now.

After reaching Albany, they headed to the Adirondacks to climb up and down Mt. Marcy, the highest point in the state. On the southwest slope of the mountains is Lake Tear in the Clouds, a small piece of water that is part of the watershed, which is the source of the Hudson River.

Russell and his fellow vets went there too before heading downstream for more navigable waters on the Hudson River for a kayak trip to New York City. Tuesday they stopped in Kingston and were ushered on land by an Ulster County Sheriff’s Office color guard for their efforts to help veterans.

“The wind has been against us,” said Russell, “but it’s for a cause.”

The numbers behind that cause are distressful. An estimated 22 vets a day commit suicide and 49,000 are homeless.

“Much has to be done to combat this,” said Mark Cozzupoli, director of the Ulster County Veteran Service Agency, of the daily suicide toll.

Kevin Keaveny is a fellow paddler with Russell and Garrison Benz, of Marbletown, and the executive director and co-founder of the Hudson Valley Center for Veteran Reintegration.

Keaveny shared his somber thoughts about veteran homelessness and suicide with the crowd that gathered at the Hudson River Maritime Museum where they landed from the Rondout Creek.

“All of them every day,” he said, about the homeless vets that could make up a small city. “This is not a joke – to watch them take their lives because they don’t know where to turn.”

After a rest in Kingston, Russell, Keaveny, and Benz will head down river with stops in Poughkeepsie, Newburgh, and West Point before arriving in New York City Sept. 30.