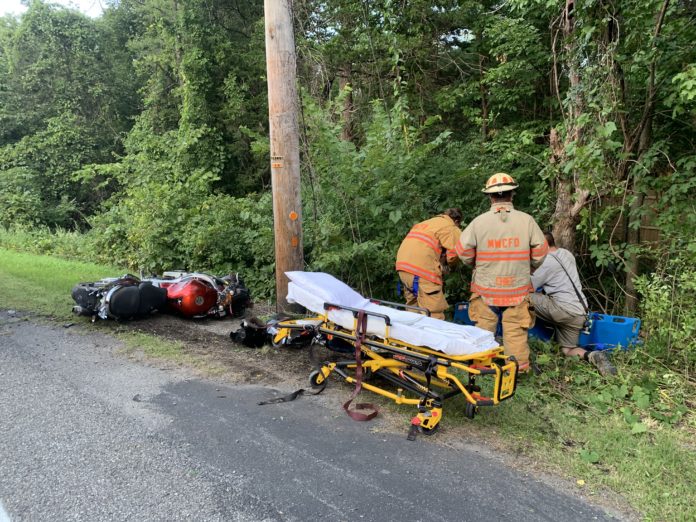 SAUGERTIES – A Saugerties resident was involved in a serious motorcycle accident Monday evening resulted in the rider being airlifted to Mid Hudson Regional Hospital in Poughkeepsie and his arrest on felony charges.

Police Chief Joseph Sinagra said that his officers responded to a motorcycle accident on Monday at 6:24 pm in front of 4066 Route 9W in Malden that involved 30-year-old Santos Rivera III.  Rivera, riding a 2006 Suzuki was traveling northbound, failed to maintain his lane, left the roadway, and struck several objects before being ejected, flying airborne into the woods.

Rivera sustained severe trauma to both legs and his torso.  He was treated at the scene by Diaz paramedics before being flown to Poughkeepsie’s Level II trauma center.

An investigation into Rivera revealed that he did not possess a Motorcycle license and that Rivera has 11 active suspensions and a revocation of his license to operate a motor vehicle in NYS.

Rivera told investigating officers that he had consumed alcohol and Marijuana prior to the operation of his motorcycle. Rivera refused to submit to a chemical test. The man has been charged with the felonies of DWI / DWAI-Drugs and Aggravated Unlicensed Operation of a Motor Vehicle, and Refusal to Submit to a Chemical Test, in addition to a number of vehicle and traffic violations.