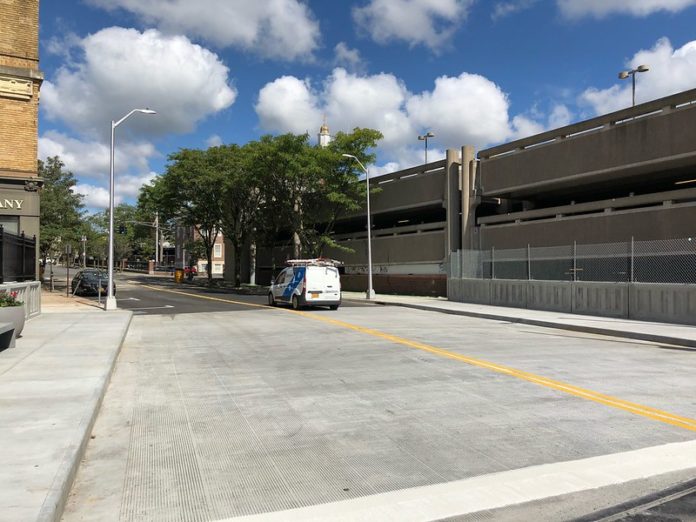 MOUNT VERNON – The 6th Avenue bridge reconstruction was completed on Saturday, September 12, according to MTA officials.  The work on the 126-year-old span began in March of 2019 and was finished a month ahead of schedule.  The bridge is now open for pedestrian and vehicle traffic to cross over the Metro-North railroad tracks.

“The completion of the 6th Avenue Bridge is a symbol of our commitment to the people and City of Mount Vernon to have a safe bridge that serves as an artery to get downtown,” said Catherine Rinaldi, Metro-North Railroad President. “We know how important this is to the community, and we are thankful to our workforce who got the job done early. Our work doesn’t end here – the 14th Street Bridge in Mount Vernon opened in July 2019 and we are working to replace other bridges in the area.”
Construction work included demolishing the old bridge, its road decks, and rehabilitating its masonry abutments followed by installing replacement girders and the concrete decks of the bridge. Signal cables were also relocated.
Additionally, as contractors worked to replace the bridge and install new metal fencing, street lighting, and traffic signals, crews conducted lead abatement and asbestos removal. The contract to replace the bridge was awarded to E.E Cruz, a civil construction contractor based in New York City.
The replacement of the bridge is part of a combined $23 million project to replace the 6th Avenue Bridge and the 10th Avenue Bridge in the City of Mount Vernon. Funding for the 6th Avenue Bridge project came from the MTA’s 2015-2019 Capital Program and cost approximately $11.5 million to complete.
Mount Vernon’s 10th Avenue Bridge is being rebuilt is and expected to open in 2021. Construction began on the 3rd Avenue Bridge in April 2020 and is expected to take 18 months to complete. Metro-North expected to seek design-build proposals from companies next year for the replacement of the South Side Bridge and Fulton Avenue Bridge. However, as the Authority is facing financial uncertainty it could impact the projects moving forward. The MTA’s 2020-2024 Capital Plan is currently on hold. The MTA is seeking federal funding as the COVID-19 pandemic has left the agency in financial calamity.
“One of the most important functions of the government is to ensure the safe passage of our roads and bridges,” said Westchester County Executive George Latimer. “The 6th Avenue Bridge is a major thoroughfare that can now once again serve as a gateway to downtown Mount Vernon – as it did me for almost daily as a young resident of the City. Every day we look for progress and today, with our partners in government, I am proud to say we have found it.”
“I would like to thank the MTA Metro-North Railroad for their steadfast commitment in repairing the 6th Avenue Bridge in Mount Vernon,” said State Senator Jamaal T. Bailey. “Prior to the repairs, the infrastructure was crumbling and made the bridge dangerous and unsafe. I am grateful to have a partner like the MTA Metro-North Railroad that prioritizes safety and the growth of the City of Mount Vernon.
“For years our city has been divided by closed bridges, but today is the next step in bridging the gap between our community,” said Mount Vernon Mayor Shawyn Patterson-Howard. “The upgrade and completion of the 6th Avenue Bridge is a milestone for Mount Vernon. It is a gateway to our hospital, our downtown business district, and our public safety departments. I’m thankful to the MTA for their diligence and hard work in completing the project and look forward to the reopening of our other bridges in the near future. We continue to move forward together towards reclaiming Mount Vernon as a jewel in Westchester.”