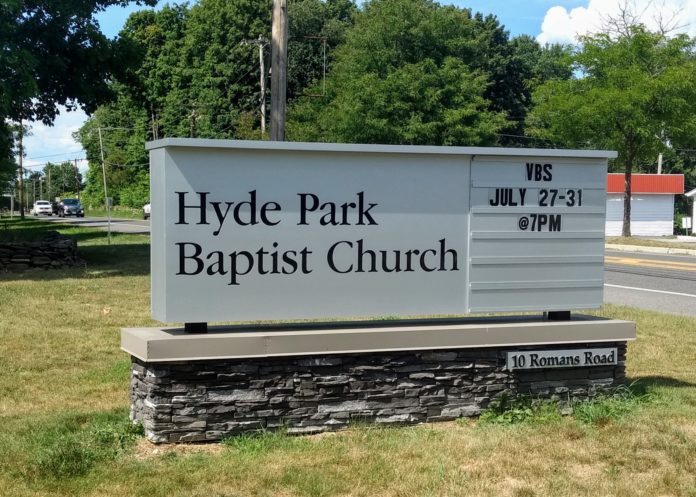 HYDE PARK – Jonathan Alan Weaver, the former senior pastor at the Hyde Park Baptist Church, has been arrested on two counts of assault and battery and the parish is the defendant in a civil lawsuit filed under the Child Victims Act (CVA) by former parishioner Shielagh Clark.  Clark was known as Shielagh Thompson at the time of the alleged abuse, before marrying.

Weaver, 56, was arrested by Greenville, South Carolina Police in February of this year as a result of two sexual incidents with the victim who was a minor at the time when Weaver took several high-school parishioners on a trip to visit his alma mater, Bob Jones University in 2001. The victim was a student at Hyde Park’s Franklin D Roosevelt High School at the time.

According to Clark, now 35, the incidents in Greenville were part of a long period of sexual abuse at the hands of Weaver, which began in 2000 when she was 15-years-old.

During one instance when Weaver molested the victim in Hyde Park, Clark says that another church employee, Pastor Nargi, walked in as Weaver was groping her, and rather than intervening, he left the room.

Clark had filed a report with the Hyde Park Police in 2005 but declined to press charges because she was afraid of retaliation.

Clark left Hyde Park to become a student at Bob Jones University in 2004.  Weaver, according to the civil complaint, concocted a scheme to visit Clark at school.

During one of the encounters, Weaver allegedly raped the victim, resulting in a pregnancy that did not go full term as a result of a miscarriage.

Under the CVA lawsuit, filed in the Supreme Court of Dutchess County, Clark, through her attorney Hillary Nappi, is seeking both punitive and compensatory damages for the claim that the Hyde Park Baptist Church refused to protect a parishioner who was entrusted with her care and well-being.

Ms. Nappi declined to comment on the case other than saying “The allegations presented in the complaint are very detailed.”  Asked what the victim is seeking to achieve, Nappi said “This is the first step in Shielagh’s journey towards regaining her voice.”

The lawsuit was recently served upon the church and they have retained legal counsel.  Neither the church nor their attorney responded to a request for comment.

Ulster comptroller says new sources of revenue must be pursued