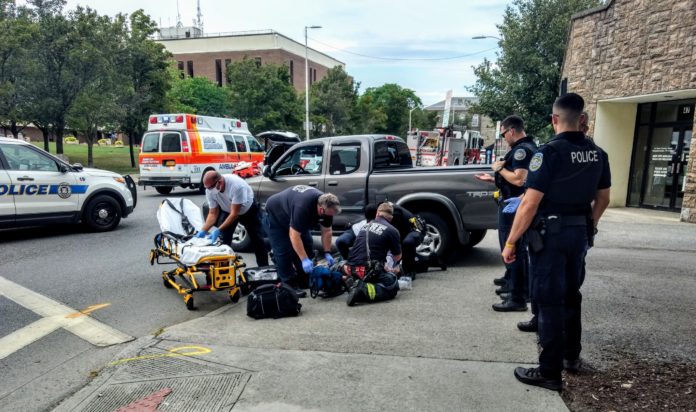 POUGHKEEPSIE – Poughkeepsie Fire Department Deputy Chief Joe Franco was heading to fuel up his fire department vehicle on Thursday afternoon when he came upon a man slumped over the steering wheel in a truck, with the vehicle partially in a lane of traffic.

Franco came upon the vehicle partially in the H&R Block parking lot with the front of the truck out in the lane of Civic Center Plaza, facing city hall.  “He was slumped over the wheel with the engine on, transmission in drive, and his foot on the brake,” he said.

The deputy chief secured the vehicle and went to work on reviving the 45-year-old patient.  He radioed for assistance and Engine 1 arrived with two firefighters, joined by an ambulance and fly car from Mobile Life Support Services.  City of Poughkeepsie police also responded to the scene unfolding around 4:30 p.m. 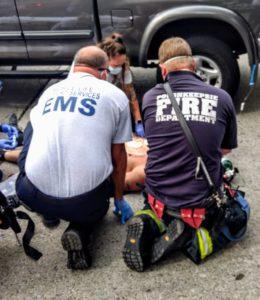 Medics and firefighters performed CPR, provided doses of Narcan, and administered two shocks with a defibrillator.  Franco said that he had detected a faint pulse at first but the man’s condition had deteriorated.  First responders, including a police officer, took turns performing chest compressions and working on the patient until a pulse was restored.

When the pulse was considered steady, the man was transported by Mobile Life to a local hospital.

Tuxedo cracks down on litter