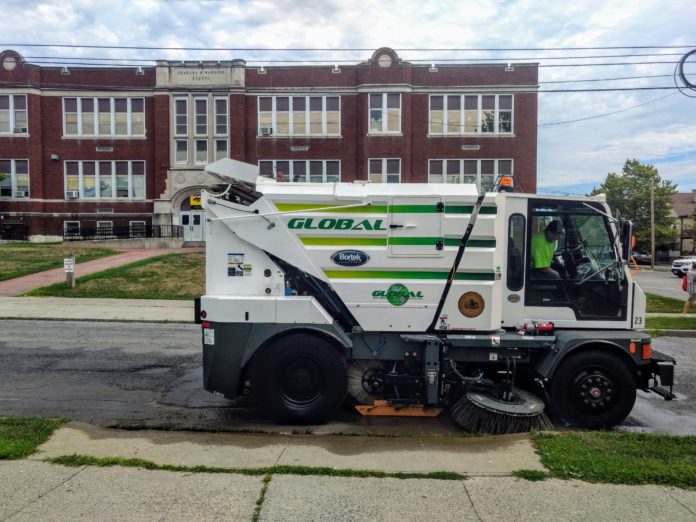 “A priority of mine since taking office in 2016 was to get another street sweeper,” said Rolison after taking the new machine for a test drive on Mansion Street in front of Warring Elementary School.

The $269,000 purchase was approved by the common council in March of this year.  “I want to express my gratitude to the council for allowing us to borrow money for this cutting-edge technology,” added Rolison.

The sweeper is the same model that New York City uses to clean the streets.  It is capable of picking up five cubic yards of sand, gravel, and other small debris before needing to be emptied.

The current “vacuum” style sweeper used by Poughkeepsie requires the operator to return back to the DPW yard to dump the contents before returning back to cleaning.  The new machine is mechanical, operating at 76 decibels, and the body can be raised up allowing it to dump the contents into a truck, rather than traveling back to the yard.  “This will save us an incredible amount of man-hours because the operator will no longer have to leave the route and travel across the city to dump before resuming operations,” the mayor said.

The manufacturer claims that the machine runs quiet enough that it can be operated at night without disturbing the residents.  The diesel-powered machine can sweep at speeds of 5-11 mph, has a very tight turning radius, and is equipped with a rear-view camera for safety.

“This is a much-needed piece of equipment that will help keep the city clean,” said 5th ward councilwoman Yvonne Flowers.  Due to limited resources, the 5th ward has had minimal street cleaning done in the past.  Rolison and Gent both indicated that the machine will be focusing on the north side in an attempt to get the streets caught up.

Mayor Rolison was seen giving the “thumbs up” as he operated the sweeper equipped with state-of-the-art controls, as seen in the video.