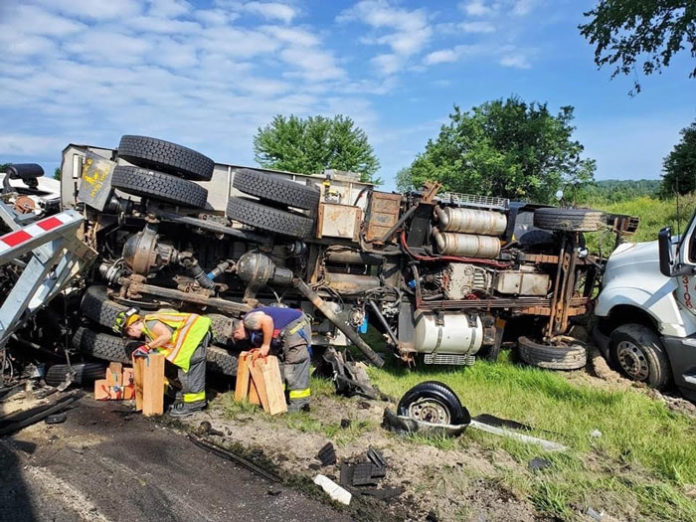 MONTGOMERY – State Police have released details of the crash on Interstate 84 in the Town of Montgomery that involved several vehicles.

Just before 8:30 a.m. on Saturday, July 25, a tractor-trailer was driving west in the left lane of the highway entering a work zone along with two state transportation department trucks.

The state vehicles were slowing down in the left lane conducting a lane closure in a construction zone with illuminated arrows.

A tractor-trailer also going west attempted to change lanes and struck the tractor-trailer in the left lane, then moved into the right lane striking the two DOT trucks causing one of them to leave the roadway.

Another tractor-trailer then failed to stop and struck one of the state trucks causing it to roll over.

The driver of one of the tractor-trailers, Steven Proctor, 61, of Clemmons, North Carolina, was airlifted to Westchester Medical Center with non-life-threatening injuries. All other injuries were minor.

The road was closed for several hours and traffic was diverted at exit 28, however, vehicles were backed up for miles. All lanes were reopened at 5:30 p.m.

The investigation into the crash is continuing.