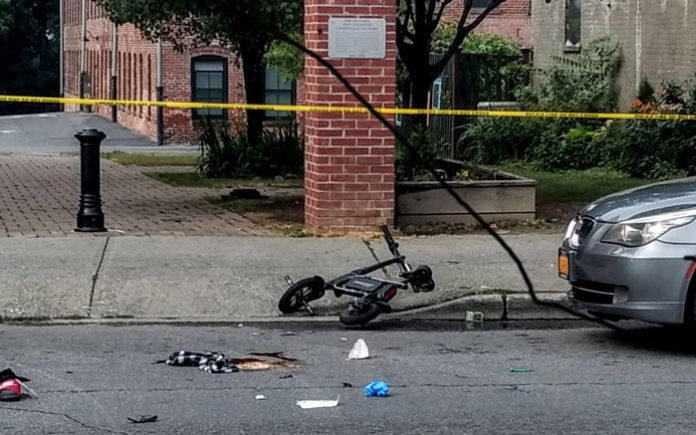 POUGHKEEPSIE – City police are investigating a collision between a Hyundai car and an individual on an electric scooter on Saturday afternoon in Poughkeepsie.  The collision occurred around 4:30 p.m. and sent the scooter rider to the hospital with a head injury.

Main Street, in front of the Underwear Factory residences, was the site of  Saturday collision that, according to police, required the scooter operator to be transported by Mobile Life medics to MidHudson Regional Hospital with injuries including trauma to the head.  The victim is in his early 30s and police say he wasn’t wearing a helmet at the time of the wreck.

Poughkeepsie firefighters on Engine 2 were dispatched to the scene that was less than 100 yards from the station.  They were on the scene in less than 60 seconds. The professional firefighters worked with the ambulance medics to stabilize the patient before transporting him to the hospital.

Police sources told Mid-Hudson News that the operator of the Hyundai was driving with a suspended license and the car’s registration was also suspended.

The area of the accident was shut down for more than an hour as police officers investigated the collision.