POUGHKEEPSIE – It was a day of peaceful protests in Poughkeepsie on Sunday were attendees expressed their outrage over the death of George Floyd at the hands of Minneapolis police officers.  The first was an afternoon rally on the steps of the Mansion Street post office and the second was a nighttime candlelight vigil in front of Changepoint Church on Mill Street.

The afternoon event was organized by Elixandra Wellington and Frankee Ryan.  Attendees slowly made their way to the post office where initially, a crowd of 60 people gathered on the steps with chants alternating between “I can’t breathe,”  and “Black lives matter.”

Members of the crowd were encouraged to address the others from the sidewalk and many did.  Several speakers denounced police brutality against African American men, which many participants said has been going on for years.  Speakers demanded that the issue be

addressed by all levels of government in order to be eliminated.

“The world watched George Floyd get murdered by police officers,” bringing several emotions like anger and sadness to the surface.  “We’re not going to stand for that behavior in our community,” Wellington said. Ryan followed, saying that “People are hurting,” after seeing the death of Floyd.

Ryan denounced the violent behavior that has erupted in many locations since the murder.  “We don’t have to riot.  We don’t have to be angry,” noting that their rally, which was drawing many additional protestors, said, “This is very peaceful and we’re still getting our message out.”

Poughkeepsie resident Satara Brown said she worries about the future of her 13-month-old nephew who is black.  “No matter how educated he becomes or how successful he becomes, to some people, all he will ever be is a black boy.”

The crowd had grown to approximately 200 at which point several people starting encouraging everyone to march through the city to spread their message along their way.  The group gathered and walked across the street past the entrance to the police station and continued south towards Main Street.

Police had requested that the marchers stay on the sidewalks and off the streets, for safety reasons.  Several city cops used their vehicles to block traffic at intersections, allowing the marchers to travel east on Main Street unimpeded.  The group continued east, alternating chants between “I can’t breathe” and “Black lives matter,” then turned left on North Clinton Street, making their way to Mansion Square Park.

Several additional participants traveled next to them in cars, with police escorts.  The group gathered in the center of the park, continuing to call attention to the deaths of men like Mr. Floyd after interactions with police.

Poughkeepsie Police Chief Tom Pape arrived at the park and made his way to the crowd to open up a dialogue between the police and the protestors.  When he got to the group, several participants started shouting questions simultaneously, making it difficult for Pape to hear the questions, which frustrated a few participants.  After a few minutes, the chief turned and left the group, accompanied by a group of ladies who were apologizing for the behavior of those that were shouting.

“I came here to give everyone a chance to interact with me as police chief, and a few people made it difficult for the many that embraced the idea,” said Pape.  The majority of the participants started leaving the park and return to the post office.  “My officers were here to ensure the safety of everyone and I was here to talk with those who are rightfully angered by the death of Mr. Floyd,” stressing “I did not tell the group to leave the park.  I wanted them to stay so we could talk.”  One of the men who had been shouting at Pape drew the wrath of several women who chastised him for his behavior.  “This is the exact opposite of what we are trying to do.  We need to respect each other if we are going to change anything,” one of the women told him.

The marchers returned to the post office and then disbursed without any incidents.

On Sunday night, more than 250 members of the community gathered at Changepoint Church for a candlelight vigil and silent prayer in honor of George Floyd.  Participants brought their own candles and lined both sidewalks stretching from the church east past Garden Street.  Police vehicles parked on the arterial with their emergency lights on to slow down traffic heading west. Most of the attendees wore masks and social distancing was encouraged.

Changepoint’s leader, Justin Sutka, said that organizing the event with Taylor was a good match of beliefs with both men denouncing violent protests and stressing the need for peace. 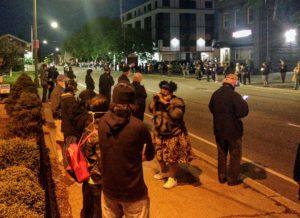 “We want to see justice and we want to see peace but the only you are going to see that is with peaceful protests,” he said.

The vigil ended shortly after 10 p.m. with a large contingent of police to pause traffic allowing the pedestrians to cross the streets and return to their vehicles.

Town of Fallsburg adds another layer of security on school district