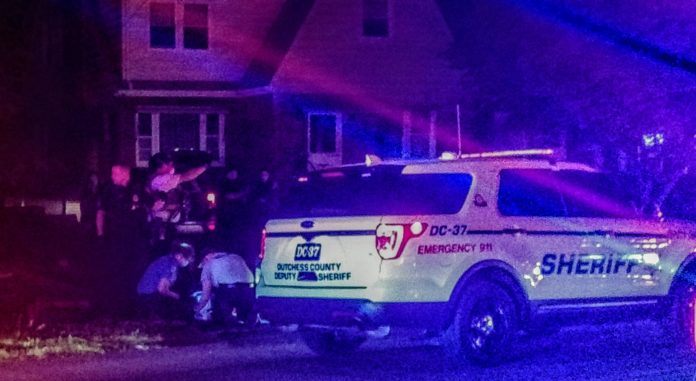 TOWN OF POUGHKEEPSIE – Town Police in Poughkeepsie responded to 11 East Cedar Street at 1:34 a.m. Sunday for a report of a person who had been stabbed.  Upon arrival, police encountered two victims in the driveway at the house, both in need of medical treatment for stab wounds.

Police officers applied at least one tourniquet to a victim while awaiting medics from Mobile Life and the Fairview Fire Department.  Officers were able to get “street names” for the three possible suspects as well as the car they used to flee the scene.  An all-points bulletin was issued to all police in Dutchess County to search for a white Ford Crown Victoria with the trunk held down by tape.  The alleged suspects are known as “Ace,” “Smooth,” and “King.”

While officers were investigating at the scene and medics were treating the victims, police were advised that another stabbing victim had arrived at Vassar Brothers Medical Center.  Police officials believe that the patient at Vassar was the third victim at the East Cedar stabbing.  The two victims at the crime scene were transported to local hospitals by Mobile Life Support Services.

Shortly after the victims were transported, the Town of Poughkeepsie Police updated the bulletin based on information received during the initial investigation.  The vehicle description was revised to have officers looking for a 2007 white Mercury Marquis, registered to an individual identified as Melissa Wood.  In addition to the multiple town officers that responded, a deputy from the Dutchess County Sheriff’s Office was also on the scene.

This story will be updated as information becomes available.

Pedestrian killed while walking along Route 17