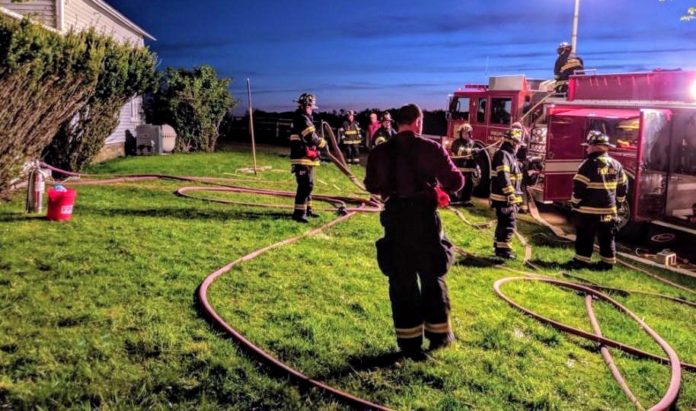 PAWLING – Pawling firefighters responded to an automatic fire alarm at 105 S. Quaker Hill Road at 3:27 Thursday morning.  The first officer on the scene encountered smoke coming from the front of the farmhouse built in 1830 and radioed for assistance.

Firefighters worked for approximately 30 minutes and were able to contain the fire to the first-floor foyer and second-floor bathroom, according to Chief Everett White.  “It is a great day to be the chief in Pawling.  The department performed flawlessly and saved the house from suffering major damage.”  The house was a “ballon-frame” structure and Chief White said “Balloon-frame structures are no friend of the firefighter,” due to the ease in which fire can sweep through the building.

Chief White said that the cause of the fire appears to be electrical in nature resulting from a short in the radiant heat wiring for the second-floor bathroom.  He added that the Pawling fire department responded to the same house several years ago for a fire and were able to keep the flames from destroying the house at that event as well.

Efforts to extinguish the Thursday morning fire resulted in heavy water damage to the affected areas but the house is still able to be occupied.

County and Hyde Park team up for 21st century policing