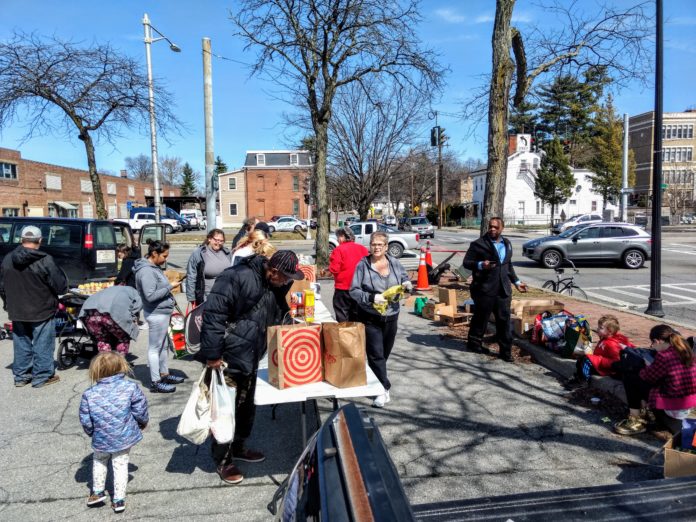 POUGHKEEPSIE – The City of Poughkeepsie PBA, Police Athletic League, and Poughkeepsie Firefighters IAFF Local 596 joined forces with the John Flowers family to feed those in need during the COVID-19 pandemic.

Members of the police and fire departments collected donations at the public safety building on Main Street last week for distribution to families that need additional food to make up for the school meals that their children would normally eat during the week.

Detective Karen Zirbel, who serves as the School Resource Officer in Poughkeepsie’s middle and high schools anticipated the need for extra food for the families and worked with Officer Kevin Van Wagner, president of the PBA, to organize a collection.  The officers teamed up with firefighter Brian Ineson, vice-president of IAFF Local 596 to make it a combined effort.

Dozens of boxes of cereal and other non-perishable food items were collected at the public safety building and held there until Frankie Flowers could make arrangements for delivery.

On Wednesday morning Flowers arrived and the police and firefighters loaded the food into his truck.  Flowers had arranged to distribute the food, along with other donations, in the parking lot of the Chance Theatre at 1 p.m. on Wednesday.  Within minutes of the announcement by Flowers, the parking lot was filled with families in need and the food was gone.

Flowers said the response was much different than what he has seen in grocery stores.  “Everyone that came today was very thankful.  The most noticeable difference was that people were only taking minimal amounts rather than the hoarding that I’ve seen in the stores.  The people we are helping need the food and are willing to make it available for their neighbors that also need help.”

Flowers also recognized that some families were unable to venture out to get the donations and he planned for that as well. He called on Micah Bennett, owner of Hudson Valley Concierge Service for deliveries.  Working with a list of needed goods, Flowers and Bennett bagged the goods and then Bennett went to deliver the items.

Firefighter Ineson said, “Our firefighters work to keep the city safe all day – every day.  This is one more way that our department steps up to help the community.”  Police Officer Van Wagner said, “Our PBA members know that some city residents need help.  Detective Zirbel and the rest of our members were willing to help out because we want our city to thrive.”