POUGHKEEPSIE – Governor Cuomo issued an order on Monday declaring that all bars and restaurants were to close at 8 p.m. on Monday to prevent the spread of COVID-19.  In his address, Cuomo announced that the State Liquor Authority was going to issue guidelines for the affected businesses by 5 p.m.on Monday.  The guidelines were not released until Tuesday morning, one of the biggest days of the year for establishments that serve alcohol.

On St. Patrick’s Day morning, the SLA announced that bars and restaurants would only be allowed to open for “take-out” service, including alcoholic beverages.  The order indicated that patrons could only purchase beverages if a meal was being purchased as well.  The announcement and delayed guidelines are being credited with causing an immediate financial crisis for bars and taverns.  “Governor Cuomo said he was going to help us by changing the rules but the rules came too late,” said Pat Rohan, manager of Mahoney’s Irish Restaurant in Poughkeepsie.

Mahoney’s, in the parking lot of the Poughkeepsie train station, is Poughkeepsie’s most attended restaurant on St. Patrick’s Day, serving more than 2,500 meals during the day’s celebration.

Since opening in 2004, the day-long celebration has started at 6 a.m. with bagpipers and continues throughout the day and night with musical acts from Ireland, Irish step dancers, and other entertainment.

Rohan said that on a typical St. Patrick’s Day, Mahoney’s has a workforce of approximately 70 employees.  This year there were eight employees working to prepare meals, bag them up, and distribute the “to go” meals to the patrons.  As of 6:00 p.m., Rohan said they had prepared and served approximately 150 meals, most of which were traditional Irish fare.  Ashley Gilnack, an annual St. Patrick’s Day performer at Mahoney’s stopped by for her “to-go” meals.

In addition to selling nearly 2,350 fewer dinners, Rohan said the loss of beer and alcoholic beverages is immeasurable.  “We fully support the efforts of the officials to curb the spread of the virus but the timing of the announcement is likely to claim smaller bars and restaurants as the first local victims,” said the veteran bar manager.  “Many of the smaller establishments rely on St. Patrick’s Day to make a living.  Unfortunately, I think a few of our friends won’t be able to overcome this hurdle.”

At the other end of the building from Mahoney’s is Amici’s Italian Restaurant owned by Chef Joel Trocino.  “This is one of the toughest things I’ve ever gone through at Amici’s,” said the chef.  Until the governor’s announcement on Monday, Amici’s was a thriving eat-in and take-out restaurant at the bottom of Main Street open seven days a week.  Once the announcement was made, followed by the delayed guidelines for restaurants that serve alcohol, Trocino took immediate action to save his business. 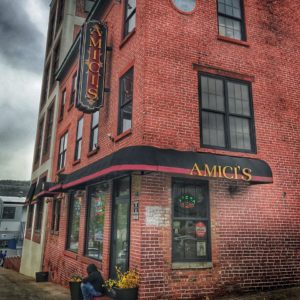 “I had to make some hard decisions, including employee layoffs.  I had to send employees home that I had worked with side-by-side for 12 years.  It was very painful,” said Trocino.

In addition to reducing the number of staff, Amici’s went from being open seven days a week to a new four-day week with limited hours.  To compensate for the lost revenue, the Culinary Institute graduate has created take-out specials such as a large cheese pizza and a bottle of wine for $19.95.  Trocino said that the decision was well-received on Tuesday afternoon with a line of patrons waiting to pick up the package special.  Trocino credited the “overwhelming support of family and friends” who shared the special deal over a number of social media platforms.  Trocino remains cautiously optimistic.  “This area has great chefs and great restaurants.  We’re all friends and we’re keeping in contact.  We are all working together and we’ll get through this,” he said.