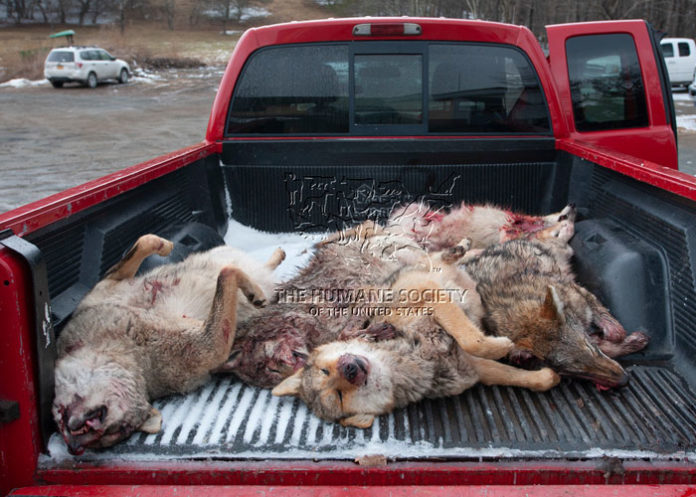 NEW YORK – The Humane Society of the United States has criticized a coyote hunting contest sponsored by the Federation of Sportsmen’s Clubs of Sullivan County.

Held recently, 636 hunters joined the contest and shot 118 coyotes with winners winning cash prizes. The heaviest coyote, at 50.3 pounds, commanded a $2,000 prize for the hunter.

Brian Shapiro of Saugerties, state director of the humane society, said the hunt is cruel using methods that included leghold traps and the use of bait and digital calling devices to draw them in for easy kill shots. “Wildlife killing contests are not wildlife management control. The New York State DEC has recognized that the random shooting of coyotes is not going to address the population issue. You would have to remove 65 percent of the current number of coyotes in order to start to reduce the population,” he said. “These contests are games; they are not science-based wildlife management control.”

Sportsmen’s Clubs President Jack Danchak, who said the hunt contest is in its 13th year, is not just about prize money, but also reducing dangerous prey that are not afraid to attack livestock, smaller animals and even people.

“They are losing their food chain. There isn’t enough food for them. That’s why even little domestic dogs and cats if they go out in the forest, they may not return. We consider them coyote bait,” he said. “Anybody in the country raising chickens or lambs or goats or any other livestock, it’s in jeopardy.”