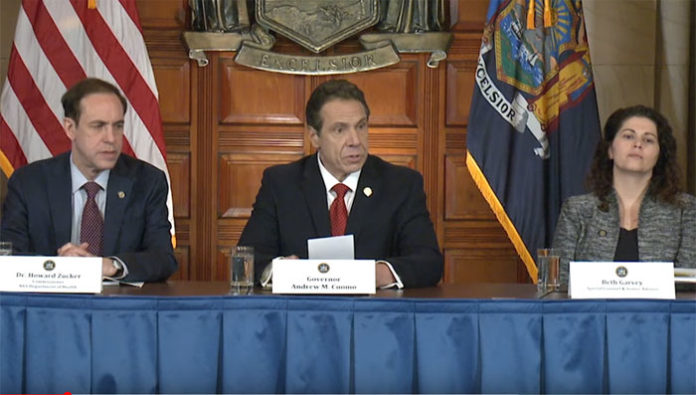 ALBANY – The number of confirmed cases of the coronavirus in New York is now up to 11.

Governor Cuomo announced Wednesday afternoon that the wife and two children of the attorney who was the first to be tested positive in Westchester County, have now been confirmed to have the virus. The man who drove the first patient to the hospital also contracted it as did a close friend of his, that man’s wife and three children.

The state is recalling SUNY and CUNY students from study abroad programs in China, Italy, Japan, Iran, and South Korea – those countries on a “watch list” for the coronavirus and they will be flown back to the US landing at New York Stewart International Airport on a chartered plane, the governor said on Wednesday.

They will be quarantined for 14 days in dormitory settings. He did not specify where they would be housed.

Meanwhile, the 50-year-old New Rochelle lawyer who tested positive for coronavirus is not the only family member with it. Cuomo said his wife, 20-year-old son and 14-year-old daughter also have tested positive as well as a neighbor who drove the doctor to the hospital.

The governor said residents in Buffalo, Oneida and Suffolk County, who were tested all came back negative.