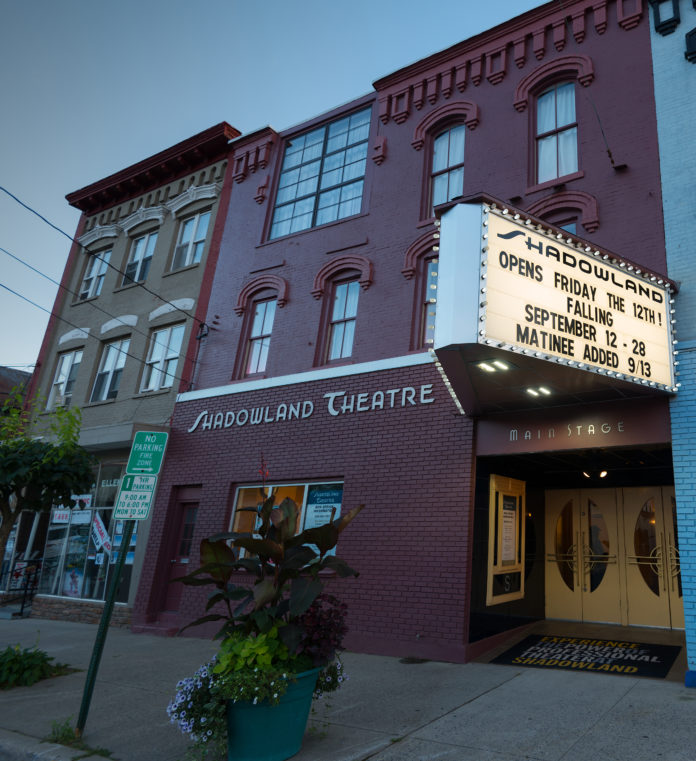 ELLENVILLE – Shadowland Stages, a professional Equity theater in the Hudson Valley is debuting a series of classic motion pictures to be shown every Friday evening in March at The MainStage at Shadowland Stages.  Located in on Canal Street in downtown Ellenville, Shadowland is inviting people to leave their living rooms and enjoy four vintage feature films as well as assorted short subjects in the communal setting of the theater as they were originally meant to be seen.

The series begins Friday, March 6th, at 7:00 pm with “Champagne For Caesar”, starring Ronald Colman, Celeste Holm, and Vincent Price. Colman plays a genius who winds up as a contestant on a quiz show and threatens to bankrupt the sponsor, a soap manufacturer played by Vincent Price. Television host Art Linkletter makes a rare movie appearance as the quizmaster. Also shown will be Walt Disney’s Goofy in “Motor Mania”; and an RKO public service short “You Can Survive the A-Bomb!”

The series will continue on Friday, March 13th, as Conrad Veidt and Sabu star in the fantasy masterpiece “The Thief of Bagdad”. Shown in a rare dye-transfer Technicolor print, “The Thief of Bagdad” was the inspiration for Disney Studios’ animated feature “Aladdin”.  Also shown on March 13th will be a Harman-Ising cartoon “The Little Mole” and The Three Stooges in “We Want Our Mummy”.

On Friday, March 20th, Lon Chaney – the “Man of a Thousand Faces” – will star in the original silent version of Gaston Leroux’ “The Phantom of the Opera”. This remarkable film has been remade many times and has become a Broadway perennial. But Chaney’s original performance as Erik the Phantom has never been approached, let alone equaled. Included in the print to be shown at Shadowland will be the famous Bal Masque sequence, filmed in early Technicolor. Also shown will be a silent Walter Lantz cartoon, “Jungle Belles”, and a classic Laurel and Hardy silent short, “We Faw Down”.

The series concludes Friday evening March 27th as William Powell and Irene Dunne star in Michael Curtiz’ Technicolor film version of the long-running Broadway comedy “Life With Father”. Based on stories about his father by Clarence Day (Jr.), the film co-stars Elizabeth Taylor in one of her early screen appearances. It’s a delightful family comedy of New York in the late 19th Century. The program will also include a Merrie Melodie, “Strife With Father”; and “So, You Want to Be in Pictures”, one of the most famous entries in the long-running Joe McDoakes series of comedy shorts.

“The films in this Shadowland Cinema series are all prime examples,” says series coordinator Ray Faiola, “of films that can best be appreciated by seeing them with an audience on the big screen.  From the visual splendor of a Technicolor fantasy and a grand guignol horror classic to the contagious laughter sparked by timely satire and a raucous family comedy are reasons why seeing movies with our friends and neighbors on a big screen is so much more rewarding an experience then seeing them on our couch or on our phones.”

The complete programs of all four Shadowland Cinema events are as follows:

YOU CAN SURVIVE THE A-BOMB!

THE THIEF OF BAGDAD

WE WANT OUR MUMMY

THE PHANTOM OF THE OPERA

SO, YOU WANT TO BE IN PICTURES

Admission is $10 and tickets are available at the Shadowland box office at 157 Canal Street, Ellenville, NY, beginning one hour prior to screening or any time online at www.shadowlandstages.org.  For more information call 845-647-5511.