WOODSTOCK – In 1990, as the nation was about to embark on the first Gulf War, protesters gathered against that military action while celebrating the birth of Dr. Martin Luther King, Jr.

Sunday, they continued to gather, following nearly three decades, to honor King and his message at the Mescal Hornbeck Community Center in Woodstock. 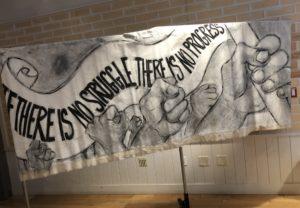 “The bombing was supposed to begin on Dr. Martin Luther King’s birthday. Ever since then, we’ve had this event.”

The celebration was canceled in 2019 because of an ice storm, but Sunday the gathering was on again after snow blanketed the region Saturday.  “When you think about it, a lot of the things Dr. King talks about, about if there is no struggle, there is no progress; we need to work toward change; we need to tell the truth, but with love in our hearts. That still exists today; that still exists,” she said.

January 15 was actually the 91st anniversary of Dr. King’s birth.

Accused mass-murderer being mistreated in jail according to attorney

Market Street users can expect delays starting ahead of schedule