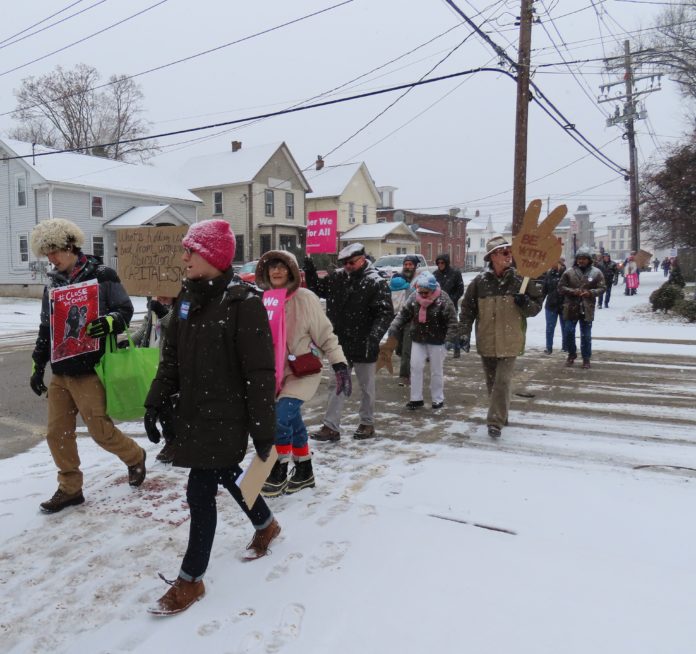 PORT JERVIS – It was standing room only in St. Peter’s Lutheran Church on Saturday morning, as between 200 and 300 people, many carrying signs with a wide range of thoughts and messages, turned out to take part in the Fourth Annual Women’s March in Port Jervis.

The local gathering was one of many Women’s March Day events held across the nation on January 18, 2020.

Locally, the theme “Justice & Unity for All Families; Building a Bigger Table” was addressed first in a community fair, then speeches, musical presentations, and a mile-plus snowy march through the city.

Agencies were on hand at the fair to assist with information and to provide direction for struggling families and individuals.  Speeches prior to the march addressed topics of unity, social issues, support and acceptance of individuals and families, and praise for inclusion of all promoted at Saturday’s gathering and mission.

“The Women’s March of Port Jervis believes support for our community’s marginalized members uplifts and improves the community as a whole,” said Margaret Spring, a march organizer from the Town of Deerpark.  Spring, along with fellow organizer Melissa Martens, also participated in leading the mile-plus snowy Saturday afternoon march through Port Jervis.

Grady Brunelle, a Minisink Valley High School Junior and youth activist who founded Gay Straight Alliance.  Brunelle spoke about being both bullied and a witness to bullying while a middle school student.  She said she enlisted the help of a trusted teacher, addressed the administration, and formed the Gay-Straight Alliance in her school.  “This kind of change can start with anyone. And when people come together, the world can change forever,” Brunelle said.  “Go out there and continue to make the world a better place.”

Renee Fatanga-Brenner, a youth advocate who works as a transition specialist, helps empower high school students with disabilities reach post high school goals.  Fatanga-Brenner, also a mother of four, spoke of the struggle to gain rights for a disabled daughter’s future, telling her audience, “Your rights are important.”

Ruth Barbosa, director of Preventive Services in Orange County, works to prevent the removal of children from their homes and to empower women to find their worth. Barbosa spoke of being married at 18, enduring an abusive relationship, and encouraged all to understand that it is never too late to get out of such situations and gain a better life.  “Extend a hand to women who have been knocked down, show support, and let them heal,” Barbosa said.  “I didn’t know about this event, but I’m going to be here from this moment onward.”

Travis Love Benson, a local transgender advocate, singer/songwriter, and music therapist, writes songs about justice and hate as well as the beauty that can be found in loving each other more. Benson performed a musical song geared toward this message and acceptance and pride in who was born to be.

Erica Dahl, a nutritionist, community leader, and mother, hopes to elevate the voices of people who are experiencing poverty. Dahl spoke about the importance of sharing meals at tables, places where relationships are made.  “Invite women who are part of the 10-million households headed by single women with children, who are food-insecure. Hunger causes serious health issues, and women living in hunger are seldom at the table,” Dahl said.  “Women, particularly those raising the future of this country, should not be left behind.”

Danita Hammock, an elder at Tabernacle Church of Middletown, spoke of her desire to have all churches rise up to take a stand for children.

Fran Fox-Pizzonia, Vice President of Government Relations and Public Policy for Planned Parenthood Greater New York, is an advocate in addressing social, racial and economic injustices.  Pizzonia urged women to ‘rise up’ and proudly stand in unity. “Demand justice, respect, equality.  Let me be direct – abortion is healthcare,” Pizzonia said. “Always rise up.  Never back down.”

Pastor Ann Akers, Presbyterian minister, is currently ministering for First Presbyterian, St. Peter’s Lutheran, and Deerpark Reformed Churches in Port Jervis.  Akers said she believes the church serves an important role in advancing social justice, and she is dedicated to interfaith bridge-building.  “We are a spiritual community with Christians who also care about these issues.  As the Dalai Lama said, there can be good anger, anger that helps bring correction to social injustices.  And as Martin Luther King said, it takes love not hatred, and that we will remember not the words of our enemies but the silence of our friends,” Akers said.

Akers led the group in prayer, noting the outrage, broken hearts, and compassion for the mistreatment of others and pledged a divine partnership for healing God’s world and being together at that bigger table.

Despite a steady snowfall, a majority of those assembled in the church completed the march along city sidewalks from the East Main Street church, down Pike Street, Jersey Avenue, up Fowler Street and back to the church, assisted by Port Jervis Police and Fire Departments for traffic control.

Algonquin Park to undergo improvements on dam and ponds