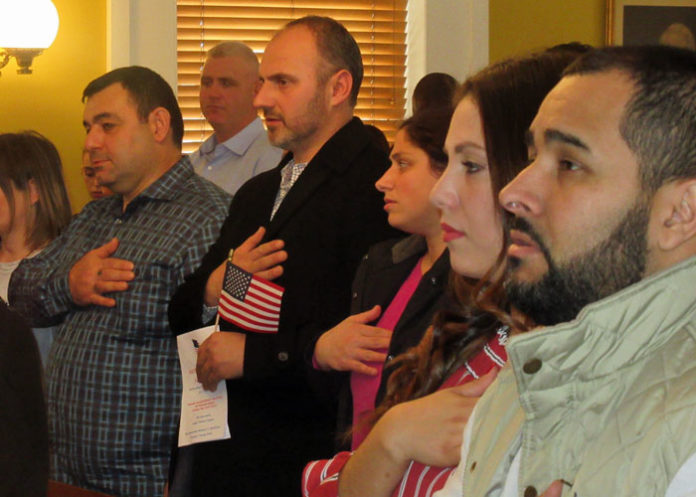 CARMEL– A total of 49 of America’s newest citizens recited their oath of allegiance to the United States and received a rousing ovation at the historic Putnam Courthouse.

The latest naturalization ceremony, last Wednesday, attended by family and friends of the new citizens, was the fourth of the year for Putnam County.

Since 2015 following a 20 year hiatus, hundreds of newcomers have taken their oaths of allegiance thanks to the efforts of County Clerk Michael Bartolotti.

Bartolotti was proud to report that 200 of the county’s newest residents became citizens this year thanks to the various ceremonies. “The best news of all is that Putnam will be celebrating many additional newcomers’ citizenship since seven ceremonies are scheduled for 2020.”

The hour-long ceremony was officiated over by State Supreme Court Justice Thomas Zugibe who called on the newest citizens to “be the best you can be. Enjoy life and always enjoy America.”

Zugibe told his audience “many Americans take their citizenship for granted. This is your dream and you have earned it. Now you can smile and say: ‘I am an American!’”

The judge reminded the newcomers that “citizenship means responsibility. Become involved in your community. Vote! Serve on a jury always remembering that we are one nation under God with liberty and justice for all.”

Putnam County Legislature Chairman Joseph Castellano welcomed the new citizens as well. He called naturalization the “nicest and most pleasurable ceremony found in our county. In America, everyone is welcome and we respect all of you. It doesn’t matter where you came from. What matters is what you do with your lives as American citizens.”

Castellano told those in attendance that his parents were both immigrants, his father coming to the U.S. from Italy and his mother from Argentina. “They came here with little and by working hard fulfilled the American dream.”

Deputy Director of Veterans Affairs Art Hanley led the new citizens in their first reciting of the Pledge of Allegiance telling them, “Welcome Americans!”

Bartolotti praised the new citizens, “This day is for each of you. Our population has become more diversified in recent years. Many of us take our citizenship for granted. You have strived to become American citizens. Today is your day.”

Carmel Dillon, affectionately known as ‘Carmel from Carmel,’ who turns 78 this week received her citizenship at the ceremony. Arriving in the U.S. from her native Ireland in 1963, Dillon finally decided to take her citizenship exam. “It was time. The Good Lord and my children and grandchildren also encouraged me. After all, I want to be able to vote and besides ‘I love America.’”

Cesare and Luisa Dippolito from Mahopac also became citizens with their grandchildren accompanying them to the ceremony.

The couple emigrated from Italy 50 years ago. When asked ‘Why after all these years?’ Cesare replied: “You are looking at two of the best reasons in the world – our grandkids.”

Isabella, five, and her three-year-old brother, Luca, beamed as they waved Old Glory.

Newburgh City Council members want to give themselves raises