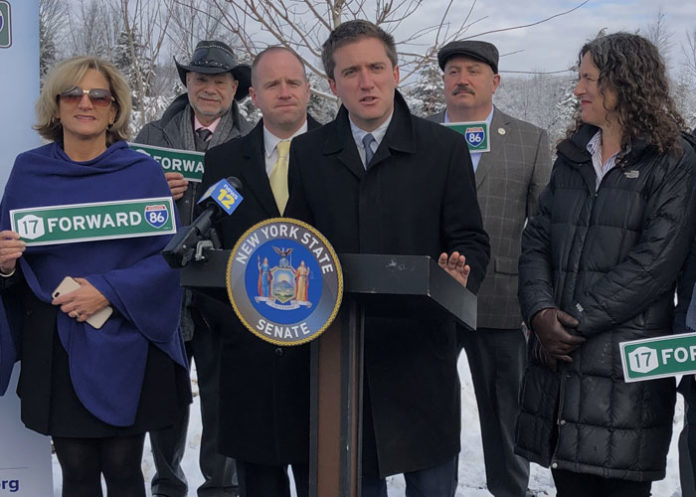 WOODBURY – The New York State Department of Transportation will release its next five-year plan on January 21, and three state senators are hoping the $500 million plan includes funding to expand Route 17 to three lanes.

“The congestion is only increasing,” said Senator Jennifer Metzger, (D, Rosendale), “and we know we get millions of people visiting the region every year.”

Metzger, who represents Sullivan County and parts of Orange and Ulster and Delaware counties, was joined in Woodbury on Wednesday by Democrats Senator James Skoufis (D, Woodbury), from the Hudson Valley, and Senator Tim Kennedy (D, Buffalo), calling for an extra lane on Route 17, now undergoing a transformation to I-86, to help with regional growth. “It’s great for the local economy,” said Metzger. “But (visitors) need to get there, and if they are sitting in traffic the whole time, they’re going to want to turn around and go back. We need to support this for our residents, our farmers, their markets in New York City. They need to get their markets, to farmer’s markets on time.”

Once DOT releases the five-year plan next month, state lawmakers will begin to negotiate how the plan will be shaped and how it will serve the state’s motorists and economy.

Legoland, a theme park based on the toy brand, is expected to open July 4, 2020, in the Town of Goshen, and that will drive more tourism to the region. The highway also serves the casino and waterpark in Kiamesha Lake, local residents and farmers, who sell their produce in the Big Apple.

Metzger said the widened highway will also make it easier for emergency response personnel to better do their jobs and serve the public.

“Our emergency services need to get from point A to point B,” she said. “It will address many issues simultaneously.”

Local public officials and economic development leaders also attended the media event calling for the funding to construct the third lane from Harriman to the Monticello area.