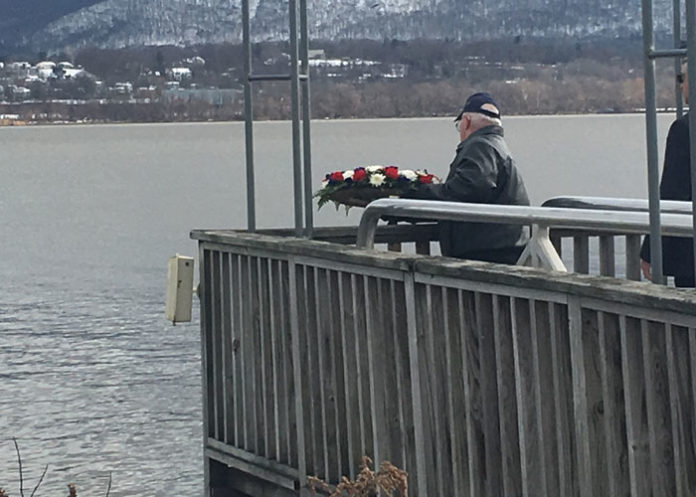 NEWBURGH — Local veterans groups laid wreaths in the Hudson River outside the Blu Pointe restaurant in Newburgh on Saturday to commemorate those who died during Pearl Harbor attack by the Japanese 78 years ago.

Eachus, also a retired school teacher, pointed out that the ceremony meant even more as schools continue to cut back on teaching American history.

“The one thing that we always hear is that our kids do not do get the history that they need any longer,” he said, “and so besides on honoring those that have served, those that are serving, and certainly the tragedy of December 7 1941, we want it to be also a learning experience for the younger generations.”

U.S. Navy veteran Ronald Alliet attended with members of the American Legion George Smith Post 1607, and he agreed with Eachus that it is now more important than ever to share with younger generations the sacrifices of World War II veterans.

“In school, they’re not teaching American history anymore,” he said. “The education system is is really messed up.”

To this end, Alliet also talked about a recent visit to Minisink Valley Middle School with fellow members of his American Legion post to educate students on the sacrifices of veterans.

Guest speaker Paul Bonfiglio shared how his family inspired him to serve in the U.S. Navy, and how he is inspired by the veterans of World War II.

“Because of the three brave men, in fourth grade, I knew I wanted to serve our great nation,” he said. “Let us never forget our veterans that served and are now serving and especially those that gave the ultimate sacrifice to preserve our great nation and the freedoms.”

Bill Wiseman, who served 23 years in the U.S Navy and three in the U.S. Army, shared how he honors his uncle each year—who was on the USS Maryland, or “Old Mary,” during Pearl Harbor.

“I’ve always tried to preserve his memory,” he said. “I try to make sure that we do all commemorations at the gravesite.”

A total of 13 veterans organizations brought wreaths that were blessed by Deacon Thomas Neppl, chaplain of the Catholic War Veterans, before being laid out in the Hudson River.