MIDDLETOWN – The Magic of Christmas will fill Middletown’s Paramount Theater with holiday sights and sounds and two world-famous performers, on Saturday, December 7, 3-5 p.m.  Jimmy Sturr (Polka King) and Jay Siegel (Solid Gold Doo Wop performer) are both lifelong New York State residents who have received top lifetime achievement awards and will share the stage not far from where each continues to call home.

On the surface, the two may seem to have little in common, especially musically.  However, their music is mutually diverse, lifestyles consistently well-grounded in their local hometowns, and each immensely talented, refreshingly humble, and have natural musical talents that have delighted fans since their childhood days.  Each lives in modest homes, in rural small-town neighborhoods, and has longtime band members that help them present wide ranges of music in addition to the genres for which they are best known. 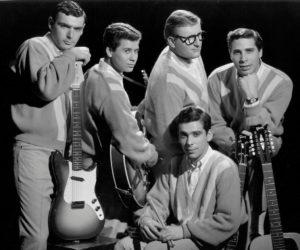 Meet the performers who will fill Paramount Theater next weekend.

Jimmy Sturr, The King of Polka, was born in Florida, New York on September 25, 1941.  He has lived in the same house all of his life, which is where he was born and raised, and where he still chooses to call home.  “So, far…,” Sturr chuckles, as he notes that he travels all over the world but always looks forward to being home in Florida, NY.

Sturr has only good memories of growing up in his hometown community.  In winter, he recalls going snowmobiling three-to-four nights a week, needing no license to drive snowmobiles on roads back then, and always seeing at least 10 snowmobiles parked in front of each bar in town.

“In the summer, we had softball and played at the Sturr Memorial Park, named after my grandfather,” Sturr recalled.  “When I wasn’t in school, I enjoyed playing soccer-baseball-basketball.  I started my band when I was 11 years old.” That band was originally called The Melody Makers, a name he changed to Jimmy Sturr & His Golden Bell Orchestra when he was 16.

“I started on piano, then alto sax and clarinet, and I played some trumpet and drums, also,” Sturr recalled. His first paid performing job was at a PTA meeting for S.S. Seward Institute in Florida’s School District.  “My mother was president of the PTA.  That’s how I got the job,” he chuckled.

After graduating from high school, he went to college at Valley Forge Military Academy.  The band stayed together while he was away, and through his Army military service that followed.  After this, he returned to performing with his band.

Sturr’s choice of Polka music for his band came not from his own Irish family heritage but from the culture of the community he calls home.  “Growing up in Florida, NY, 85 percent of the people were Polish.  They came across from Europe to work in the onion fields, and brought their traditions, including music, with them.  Our high school dances were all played by a polka band.  The local radio station had a polka show every day, and of course Pine Island had the traditional three-day Polish weddings,” Sturr said.  “It’s what we did.”

While his band has always been known as a polka band, they play everything.  The upcoming Magic of Christmas concert will not be mostly polka music but will include the popular Jimmy Sturr Singers and a lively large delegation of Pokolenie Dancers.

“You’ll see when you watch it.  Every year we also have a guest artist on the show.  Last year we had Larry Chance & The Earls, the year before Jermaine Paul, winner of The Voice.  I’m good friends with The Tokens manager, so we decided to have them,” Sturr said.  “It’s going to be a lot of fun.”

Sturr, who has won 18 Grammy Awards and is a Top Ten all-time recipient, has five gold-sale albums. He has shared the stage and recorded music with some of the best-known performers in the world.   These include The Oak Ridge Boys, Charlie Daniels, Mel Tillis, Bobby Vinton, Alison Krauss, Bela Fleck, Ray Price, Lee Greenwood, Arlo Guthrie, Duane Eddy, Larry Chance & the Earls, and more.

“I’ve had so many memorable, defining moments, including our band recording five CDs with Willie Nelson, and doing Farm Aid and TNN Nashville Network with Nelson and friends.  We’ve also played many times for New Year’s Eve in Europe – Germany, Austria, Switzerland – and for the biggest television special ever.  The special was seen throughout all of Europe on New Year’s Eve,” Sturr said.  “This past summer, I was on ABC’s To Tell the Truth, which was really fun.”

Sturr continues to travel and perform around the world, and has a weekly national television show – The Jimmy Sturr Show. This show airs Fridays at 7 p.m. on many stations, including Direct TV (Channel 345), Dish Network (Channel 231), and Spectrum (Channel 297).

His advice for young people hoping to follow a musical path and entertainment career?  Go for it! “Follow your dream.  That’s what I have always tried to do.  I always knew what I wanted, and worked for that,” Sturr said.

Jay Siegel was born in Brighton Beach, NY, on October 20, 1939.  He lived just two blocks from the beach, so his childhood years, remembered as great ones, included hanging out on the beach, fishing off jetties, working summer jobs, and singing – always singing – even on the beaches with friends.

Siegel grew up in a middle class, blue-collar neighborhood where his father and older brother went to work Monday through Friday, simply to pay the bills.  They worked in non-enjoyable jobs and looked forward each day to weekends.  As a result, Siegel surmised early-on that a career in music was simply too much fun to possibly provide a living.  Instead, he went to college, earned a degree in Market Research, and saw a future in the garment industry or another business path. “Yet, music became a dream come true for me, and I never really used that degree,” Siegel said.

Siegel recalled singers in the mid-1950s knocking on doors of music producers and, if lucky as he was, getting an early start. Many, like himself, began during their teenage years at Abraham Lincoln High School.   Siegel is one of many well-known alumni from this school, including Lou Gossett, Neil Diamond, Barbara Streisand, Carol King, Neil Sedaka, Arthur Miller, Harvey Keitel, and many others.

While he did not actually envision a musical career back then, Siegel was paid for singing early on in life.  He was one of only two children invited to be in his childhood temple’s choir and was paid $50 per performance beginning at age 10.  After being invited by Sedaka to join his high school Linc-Tones group, he was paid $12 per band booking.

Siegel, however, loved the music so much he says he would have done it all for free, including when the Linc-Tones first became The Tokens.

It was with The Tokens that Siegel’s best-known hit, among dozens produced by the group,  was recorded. “I was listening to the radio one day – which was before you had to pay for it – and I heard The Weavers recording live (Christmas Eve 1955) from Carnegie Hall.  I just loved how they sounded, and when I heard that high point in Wimoweh, I thought – I could do that,” Siegel recalled.

The song, a South African lullaby chanted to lull animals to sleep so they could be hunted for food for hungry villagers, was originally named Mbube (Eem-boo-beh) – Zulu for lion.  The Weavers called it “Wimoweh” and The Tokens “The Lion Sleeps Tonight.”

The Tokens’ version, a multiple top hit, has been used in Disney movies, on Broadway, in commercials, and three years ago in a National Geographic production warning of extinction without conservation.  It was created following the death of Cecil the Lion at the hands of an American dentist, a trophy hunter, in Zimbabwe in 2015. Actor/performer Beau Davidson’s/Jay Siegel and The Tokens’ stirring three-minute-plus National Geographic clip may be viewed here.

Siegel just celebrated his 80th birthday, an irrelevant fact of life for the energetic, upbeat entertainer.  Every time he is on a stage, Siegel says he becomes 22-years old again.   He is grateful that he is fortunate enough to be able to keep giving audiences what they want.

“The work is never in the performance.  That is a joy.  But it does take a lot of time and effort to get there,” Siegel said,  “Which I also never mind.”  Siegel said he doesn’t mind the time and effort, as he goes home at the end of each job just like anyone else.  “I’m like others who goes to work.  I just have a different kind of job,” Siegel said.

As much as he loves performing, he is also always mindful that his work is only part of his life, never all of it.  “When I’m not on the stage, I’m putting gas in my car, taking out the garbage, grocery shopping, all the things everyone else does,” Siegel said.  “My wife and family life have kept me well-grounded, and no doubt saved my life during the crazy times I performed through.  I married young and our first child was born when we were young.  Other people would go out after shows, but I went back to my hotel or home to my family.”

This he says helped him keep his voice in shape, keep acting normal, and celebrate a recent 58th Anniversary with his wife Judy.

While other entertainers share that women’s lingerie is sometimes thrown at them while performing, it has been said that stuffed lions are what is tossed at Siegel, a fact he verifies as true. “I have a collection.  Sometimes I bring some with me and give back.  I give them to people in my audience,” Siegel said.

Siegel remains the sole career entertainer in his family but has a son who was a director and a grandson who is a talented musician who just graduated from college.

Like Sturr, Siegel remains highly in demand and has a schedule that would wear out entertainers decades younger in age.   Both are really excited about the December 7th show that is quickly filling seats in Middletown’s Paramount Theater.   To order tickets for this special show, visit http://middletownparamount.com/event/jimmy-sturr-presents-magic-christmas/