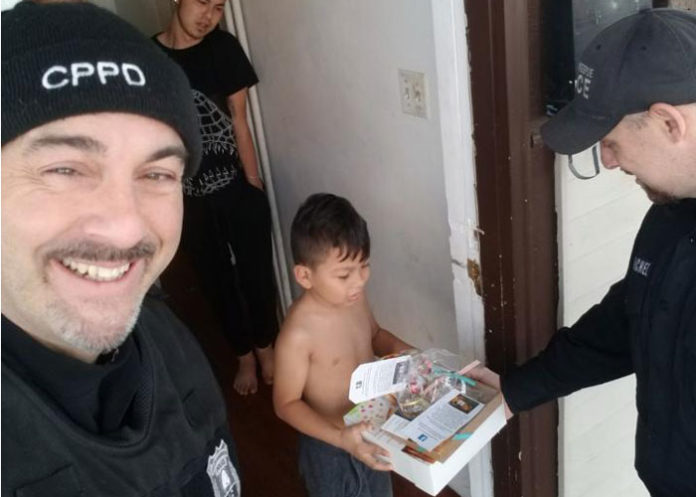 POUGHKEEPSIE – The City of Poughkeepsie Police Department was busier than usual on Thanksgiving day.

In advance of Thanksgiving, the officers solicited donations of pies, cakes, and cookies to be delivered throughout the city on Thanksgiving morning.

Community Policing Officers Kevin Van Wagner and Mike Braren handed out flyers to local businesses for the “Thanksgiving Dessert Drive” and Braren said that the community was very responsive to the request.

Jeremy Phillips, owner of Schatzi’s on lower Main Street delivered 30 pies to the cause.  “When we learned of the drive, we knew we had to help,” said Phillips.  “These men and women were sacrificing time with their families to go out and create a better community.  We appreciate the services provided by our police and support them every chance we get.” 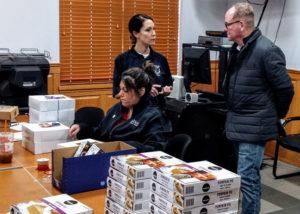 Police Officer/School Resource Officer Karen Zirbel had worked with teachers and other staff from the school district to develop a list of families that would need a dessert.  She also drew up a list of students who would get a delivery because of their good behavior in school.  “Oftentimes we don’t get a chance to acknowledge kids that are doing the right things because we are busy dealing with problematic students.  This is our way to tell the good ones that we do notice their efforts and that they are appreciated.”

Mayor Rob Rolison donated pies to the drive on Wednesday and showed up again on Thanksgiving morning to thank the officers for their efforts.  “This city has a great police department,” said Rolison.  “Our men and women take pride in the community and they are always looking for ways to help.  It is also a great outreach effort so that more people t to know their officers.”

Zirbel and her colleagues set out on Thanksgiving to deliver the treats throughout the city.

“We delivered to families and others on the list including Mobile Life, Dutchess County Jail, nursing homes, and any place that was open,” said the SRO.  Zirbel added that after the planned deliveries were completed, they were handing out treats to people they encountered out and about in the city.  “It was super fun and our officers really had a good time doing it.”

Coxsackie man arrested for possessing obscene performance by a child