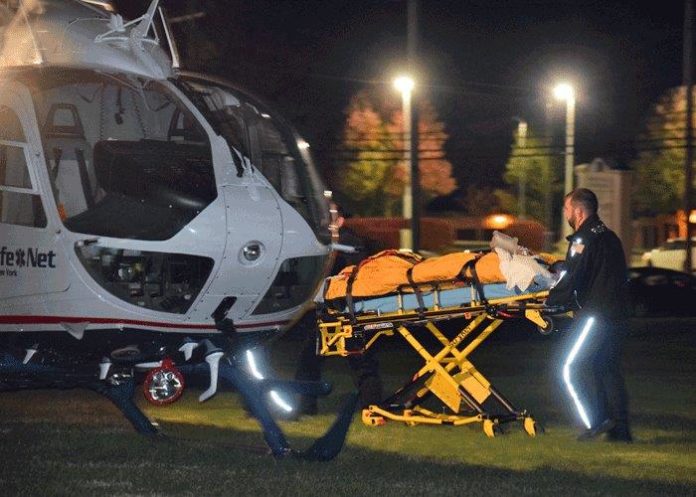 NEW WINDSOR – A 23-year-old Newburgh man sustained four broken ribs, broken facial bones and a collapsed lung when his car slipped off a jack as he was working on it and it fell on him.

The accident on Tuesday, November 5, occurred shortly after 5 p.m. at 1 Coutant Lane in New Windsor.

Three New Windsor Police officers who responded to the scene lifted the vehicle off Justin Muller while two other officers pulled him out.

Muller was airlifted to Westchester Medical Center in Valhalla for treatment of his injuries. Police said on Wednesday that he was listed in stable condition.

Muller’s mother wrote a Facebook post thanking the police officers for their quick action in saving her son.

She said he had been working all day trying to fix and replace the control arm on his car after driving through Lake Drive south in Newburgh and hitting a manhole that broke the arm the night before.

“Because of your immediate response and extraordinary effort you and a few more good officers manually lifted the car and got him out,” she wrote. “With the help of New Windsor Paramedics, they were able to decompress his collapsed lung and then transfer him to a helicopter for transport to Westchester Medical hospital for immediate care.”

Woman charged with rape for having sex with underage boy