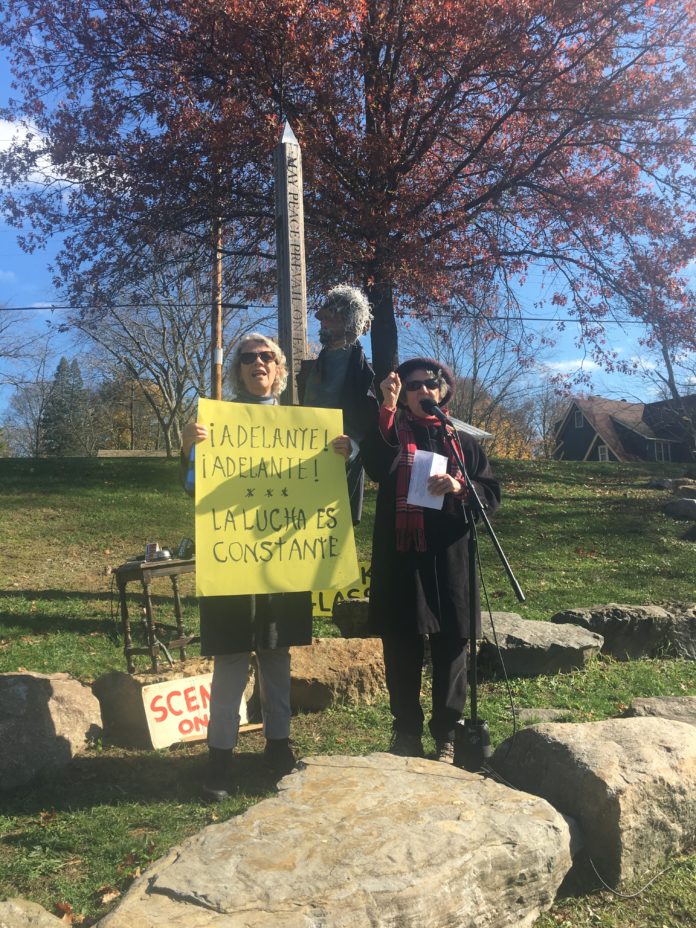 Co-chair Donna Goodman made a cry for help to preserve the democratic principles the country was founded on.

“We all showed up today to stand up against white supremacy, and to stand up for democracy,” she said. “We could lose it.”

Olver described an incident from when she was 15 years old that made her aware of racism in this country.

She was at the supermarket with her mom when she encountered a random man while putting away groceries.

“As someone who does not identify with a particular race or heritage, it wasn’t until recently that I experienced true bigotry,” she said. “While I was crossing the parking lot to get into my car, a man screamed from across the way, ‘go back to Mexico.’”

It was this incident that inspired Olver to get involved in social justice issues. Olver is currently a member of the New York Public Interest Research Group (NYPIRG), a nonprofit organization geared toward college students that has a chapter at SUNY New Paltz.

“As a product of both the colonizers and the colonized, let me be very clear: enough is enough,” she said. “If you truly wish to make America great, you would see that diversity is crucial.”

Kristen “Kitty” Brown attended the rally with a sign featuring a quote from Congressman John Lewis, who has been vocal against recent incidents perpetuated by the Trump administration and a symbol of inclusiveness in Congress.

She described how the optimism felt in the 1960s and after the 2008 election as disappeared in recent years.

“I just feel that all the hope that we felt from the Civil Rights Act and from electing President Obama, we had recognized how ingrained racism was, and the country was ready to pull together to say no more,” she said. “To be where we are today, we need to take our country back.”

New Paltz Women in Black is a chapter of a worldwide organization that represents women seeking to bring peace around the world. The New Paltz chapter started hosting peace vigils every Saturday afternoon after the September 11, 2001 attacks.

Accord man charged with violating order of protection